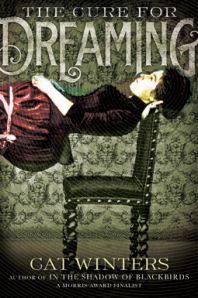 Olivia Mead is a strong-willed young woman living in Oregon in 1900. She loves to read fiction – Dracula is her current favorite novel – and she dreams of going to college. She also happens to be a suffragist, something her narrow-minded father doesn’t know anything about. Olivia’s mother left her with her father when Olivia was a young child; she lives in New York where she ekes out a living as a stage actress and dates wealthy men. She sends Olivia money every birthday, but doesn’t seem to be otherwise too involved.

Olivia’s father can’t take much more of his headstrong daughter’s ideas. He fears her behavior will lose him patients, so he contacts Henri Reverie – a mesmerist (a hypnotist) that hypnotized Olivia in a recent performance –  to “cure” his daughter. He asks Henri to help Olivia to “see things as they really are”, and rather than argue with him, to say, “All is well” when she’s angry.

It backfires. Horribly. Olivia does see things as they really are – she starts seeing oppressive men as bat-vampire-wolf creatures, and anti-suffragist women as pale, ghostly beings. She is unable to defend herself, only able to say, “All is well.” She finds herself the target of ridicule as her father glories in his “success”. But he hasn’t succeeded in doing anything other than stoking the fire of Olivia’s independence, and her desire to get away from him at all costs. She seeks Henri’s help in restoring her mind, and finds out that Henri’s story goes far deeper than a mere stage performer.

The Cure for Dreaming is one of those stories that initially makes your head swim – Dracula, suffrage, and hypnotism? It all comes together, but there are moments when the narrative lost me. There is a subplot surrounding Henri’s younger sister that was felt almost tacked on, and Olivia’s father verged on caricaturist in his rage. Olivia seems far too complacent about her absent mother leaving her with a verbally abusive and neglectful father – she left because she couldn’t take it anymore, but it was okay to leave her kid with him? And it’s okay to drop a line and tell her how much she misses her ONCE A YEAR?

Overall, The Cure for Dreaming is an interesting read. The photos that Ms. Winters chose to feature throughout the book, archival photos of suffragists and the time period, drew me right in. The subplot about an anonymous letter that adds fuel to the suffragist fire was one of the best parts of the book.

The author’s website offers a treasure trove of information, including book trailers, information on the periods during which her novels take place, an FAQ, links to social media, and book information.