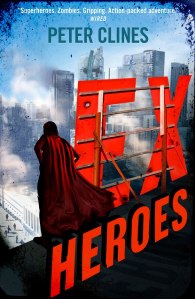 Peter Clines’ Ex series, beginning with Ex-Heroes, is one of those series created for adults but easily crosses over into the teen readers’ market. It provides an interesting new take on the zombie apocalypse, with this universe offering superheroes who continue protecting humanity by creating a haven in an abandoned Hollywood movie lot for survivors.

As with the best post-apocalyptic/zombie tales, the interplay between people facing the end of the world is what makes Ex-Heroes compelling reading. You not only have survivors, The survivors are split into those inside the sanctuary and those outside – inside the sanctuary, we have the superheroes – metahumans – and “regular” people. Outside, there are predatory gangs that have turned the surrounding areas into their kingdom. They try to infiltrate or sabotage the heroes’ camp and supply runs, but have been largely unsuccessful until they find themselves with a terrifying advantage that could destroy everything the heroes have striven to build. Add in the fact that within the sanctuary, there’s dissension in the ranks as more and more people find themselves uneasy about being governed by superpowered individuals, and you have a the makings of a compelling post-apocalyptic saga.

The best zombie stories are not so much about the undead, but about the survivors and how people break down – or endure – life at the end of the world as they know it. Here, Ex-Heroes shines. The relationships between heroes is complex to begin with, and the stress of the situations around them, added to the fact that there are now superpowered undead to compound the situation, amp up the action and the desperation. We get origin stories and back stories for the major heroes: Stealth. Gorgon. Regenerator. Cerberus. Zzzap. and The Mighty Dragon, and the action shifts pretty seamlessly from past to present, giving us a full picture.

While written for adults, Ex-Heroes is an accessible book for teen audiences who enjoy horror/post-apocalypse fiction. The violence is not gratuitous and while there are allusions to sex and some language and overall content, I see no reason why a mature teen would not be able to read and enjoy this book.