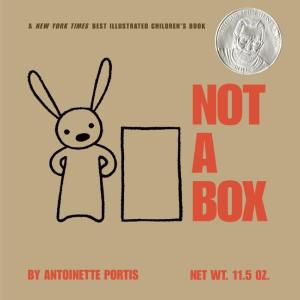 A young bunny uses his imagination to make an ordinary cardboard box into a spaceship, a mountain, a robot, and more.

Not a Box illustrates the importance of childhood imagination. The rabbit insists that his toy is “not a box” in answer to the repeated question stated in the title. Using bold, black line drawings on white backgrounds, each page presents readers with the inner working of the rabbit’s imagination; what he imagines his toy is rather than what it isn’t: a race car; a burning building that his fireman can put out; a robot; a mountain. The questions are featured in bright white text against a brown background – the color of a cardboard box. Even the cover and endpapers have the color and texture of a cardboard box. The simple art and design of the book add to the importance of imagination contained within.

This book provides the opportunity for an imagination read-aloud, where children can participate by repeating, “It’s not a box!” in answer to the questions asked on each spread. A printable activity at TeacherVision encourages children to illustrate their vision of “not a box”, and offers coloring sheets and instructions on making their own “not a box”. An episode of Spongebob Squarepants features Spongebob and Patrick the Starfish play with a box, using their imaginations; this would be fun companion viewing to the reading.  For those lapsit readers who may not grasp the concept of the box being 3-dimensional, incorporating a cardboard box into storytime can further spark the imagination and get them thinking about what the box can be.

The book has received designation as an ALA Notable Children’s Books (2007), and received Theodore Seuss Geisel Honors (2007).

The author’s website offers information about the author and her books. She continues the story in Not a Stick. 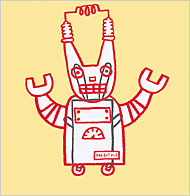 One thought on “Book Review: Not a Box, by Antoinette Portis (HarperCollins, 2006)”