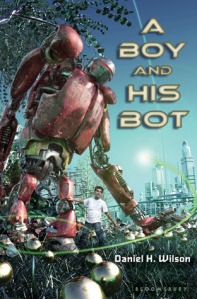 On a class trip to a Mek Mound, an ancient Oklahoman Indian land mound reminiscent of the Egyptian pyramids, sixth grader Code Lightfall discovers Mekhos, a manufactured, experimental world inhabited by robots and long forgotten by humans. The world is under the grip of the evil tyrant Immortalis, bent on the world’s destruction; it falls to Code and Gary, an atomic slaughterbot brought to life by Code’s imagination and Mekhos technology, to find the Robonomicon and save the day.

A Boy and His Bot is a journey to Oz tale for a more modern age, complete with beautiful and deadly surroundings like the Toparian Wyldes, the beautiful forest maintained by a race of robots who trim and sculpt anything in their way, their upkeep programming overriding any other directive. Where Oz has a benevolent wizard, Boy  has Immortalis, the evil overlord who pushes all robots to the day of The Great Disassembly, when all of Mekhos will be undone. Code’s main objective, beyond stopping The Great Disassembly from taking place, is to get back home.

I have noticed that heroes in “boy books” often come from dysfunctional families, and Code is no exception. A shy boy, picked on by some classmates, ignored by others, Code is grieving the disappearance of his grandfather John a year prior. His parents are not in the picture. The only positive female force in the book is Peep, the little robotic probe that befriends him and leads him to the world of Mekhos. Gary the Slaughterbot plays the part of the all brawn, no brains protector with the heart of gold.

I wonder why it is that young male characters’ families are so flawed in YA literature. Is this an accurate reflection of the state of families today, or is this the newest hook to keep young boys reading? Is it a way to reach out to young boys that may be in crisis and refuse to speak?  The combination of robotic creatures, a manmade world on the brink of destruction, and an invention like the slaughterbot alone is enough to grab a boy’s attention on the surface, but Code’s background gives him a depth that should help boys and girls alike be interested enough in his journey to travel along with him.
Daniel H. Wilson, Ph.D. is the author of How to Survive a Robot Uprising, Where’s My Jetpack, and How to Build a Robot Army. A Boy and His Bot is his first YA novel, but he has also written Bro-Jitsu: The Martial Art of Sibling Smackdown, and his Robot books are popular with older tweens and teens. He maintains an author website.