This picture book bio of Siddhartha, who would become the Buddha, the founder of Buddhism, touches on key moments in his life: his birth, youth, and marriage; his leaving the palace on his journey to find happiness, his new life as he sought and achieved enlightenment; his teaching and traveling, last days, and legacy. A timeline provides a more linear, dated glimpse at the events covered in the book, and a map shows readers important locations in Buddha’s life. People to Know offers profiles of important people in his life, including his mother and the Dalai Lama, and an illustrated “Did You Know” section offers some quick, additional facts on his life.

The art is rounded and bright, soft and cute, with some beautiful moments, particularly when Siddhartha fully realizes enlightenment, and as he teaches a group of students. A picture of an aging Buddha is gentle, tinged with an understanding that he will be moving on. There are some truly lovely moments to be found here.

Each spread in Marie Antoinette’s Pocket Bio covers a major period in her life; the factual information on the left hand side provides the dates. We first meet her as a young princess in Vienna; move along to her 1770 wedding to Louis XVI, and then to his coronation. Then, we move into the Marie Antoinette period that everyone’s familiar with: the lavish lifestyle, depicted by a huge dinner party. As the text reminds readers, Marie Antoinette was not content in her royal duties, leading her to seek refuge at a village, built just for her, her children, and her friends. Meanwhile, revolution was in the works, and in 1789, the French Revolution began, illustrated with a French mob brandishing swords and pitchforks, outside the burning Bastille. As Marie, Louis, and their children tried to escape Paris in 1791, they were arrested and taken back to Paris, where they eventually met their ends at the guillotine – Louis, in 1793, Marie, soon after. The pictures are dramatic, loaded with shadows and flame during the Revolution; pastoral and soothing during the happier times in Marie’s life. There is a timeline, map and key of Europe in 1793, with key areas emphasized. People to Know include Marquis de Lafayette and Yolande de Polastron, one of Marie Antoinette’s close friends. Did You Know? fact to handsell the book: Marie Antoinette has some hairstyles that were four feet tall!

Artist Vincent Van Gogh’s biography also includes dates for the key represented moments in his life. We begin with his childhood in the Netherlands, and touches on the close relationship between van Gogh and his brother, Theo; we move onto an apprenticeship under his uncle, where he traveled to London and Paris, developing a love for art. He was a pastor in a coal-mining town from 1877-1880, and spoke out against the dangerous conditions in the mines, which influenced his painting, The Potato Eaters. From there, van Gogh embraced his love of art and began painting in 1880, after moving to Antwerp. From there, he moved to Paris, to be with Theo, but he tired of city life and relocated to Arles, where he could live and work in the countryside. The book touches on van Gogh’s struggle with mental illness and the work he created while in the hospital and under his doctor’s care. Finally, the narrative addresses his suspicious death – previously thought to be a suicide, and his posthumous fame. The timeline includes all of the moments written about in the book, and the map and key emphasize six key location in van Gogh’s life. People to know include his brother, Theo, and artist Paul Gaugin. Key Did You Know? takeaway: his most famous work, Starry Night, was painted during his time at a psychiatric hospital and he thought it was his greatest failure.

Pocahontas’ biography, also dated, starts with her years growing up in the Powhatan tribe, located where Virginia is now. The English arrived in 1607 and established the Jamestown colony; the illustration shows a young Pocahontas watching a ship dock at a newly built port. The brutal winter forced the settlers to send John Smith to ask the Powhatans for help, which led to his imprisonment. Here, the narrative diverges from the history books I grew up with (thank goodness) and points out that John Smith most likely made up the story of Pocahontas throwing herself in front of him to save him from certain death; she then becomes a friend of sorts to the Jamestown settlers, visiting them and working to keep peace between the Powhatans and the settlers. John Smith’s 1609 injury required him to head back to England – and Pochontas was told that he died on the voyage home. At this point in history, relations between the Powhatan tribe and the settlers fell apart, and they warred with one another. Pocahontas was taken prisoner and brought up English – her father refused to trade her for English prisoners – eventually marrying settler John Rolfe, converting to Christianity, and taking the English name, Rebecca. The wedding helped ease relations between the Native Americans and the settlers, and Pocahontas – now a mother of two sons – was invited to visit England. She became ill and died while traveling, and is buried in England.

There are some beautiful moments in the artwork here – a ship sailing into the golden sunlight, Pocahontas as a child, playing with other children, with a waterfall streaming in the background. There’s a timeline and illustrated map; people to know include Pocahontas’s father – not Powhatan, but Wahunsunacock, and King James I. A key Did You Know? fact reminds readers that John Smith was not the most reliable narrator.

The verdict? The Pocket Bios are a good start for younger readers, but aren’t the first resource you should seek. It’s a good series to start planting an interest in history and key people in history. Readers who enjoy Brad Meltzer’s Ordinary People Change the World series of biographies will likely enjoy these.

Did you know that Vincent Van Gogh, one of the greatest artist of all time, was bullied? Not as a child, either – as an adult. When the Dutch artist moved to Arles, France, he was taunted and bullied by the townspeople, including the children, who mocked his bright red hair and his unusual artistic style. It’s even a recent theory that Van Gogh did not commit suicide, but was shot by two teenage boys that he knew.

The Artist and Me is told through the eyes of a childhood bully, one of Van Gogh’s tormentors, looking back at his life. Written as a journal entry, or possibly a letter to a son or grandson, the unnamed narrator begins by writing, “I used to do an ugly thing…” and tells the story of how he laughed at and ridiculed a “crazy man with wild red hair and a short red beard and a dream.” While he’s secretly intrigued by Van Gogh and his paintings, he falls into bully mode, “in crowds, of course, since that is what cowards do.” One day, he follows Van Gogh into a field and sees, just for a moment, the landscape as the artist does, and this transforms him – but when Van Gogh tries to connect with him, he runs away. As an older man, he sees the paintings in a museum and sadly writes, “I don’t laugh at him anymore”.

The Artist and Me is a message to both the bullied and the bullies. Anyone can be a target, but you can also rise above it. Van Gogh never gave up on his dream of telling the truth with his art. Bullies are redeemable – and you don’t have to wait for years to pass before realization. Seeing the world through someone else’s eyes can be the great equalizer, if one is brave enough to let it happen. The acknowledgement that bullying is a team sport for cowards delivers a strong message that I hope reaches children and adults.

Sophie Casson’s beautiful art is created in Van Gogh’s signature style, looking very much like he illustrated this story. She uses bold colors and lines, creating landscapes and people alike.

This is the kind of book you read to all of your grade levels to talk about the consequences of bullying. Putting Van Gogh’s story out there for people to hear and see opens up the chance to have some deep conversations about mob rules, crowd behavior, and most importantly, the effects that bullying has on both the bully and the bullied.

Take a look at some of the beautiful artwork from this powerful book. 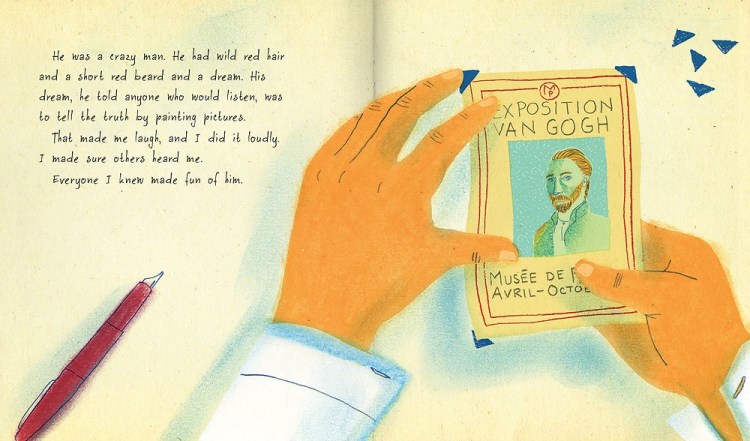