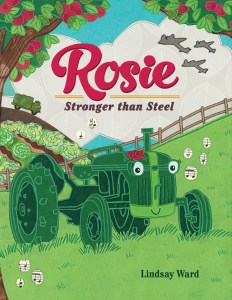 In a nod to history, and a fitting way to send off Women’s History Month, Rosie: Stronger Than Steel salutes the American and English women who took care of business during World War II. Most of us know the iconic Rosie the Riveter, symbolic of the women who went to work in factories during the War, but not many of us in the States have heard of the British Women’s Land Army, tthat encouraged women to work in agriculture, keeping he Women’s Land Army was a British civilian organisation created during World War II so women could work in agriculture, so that Britain – an island nation that largely relied on imported food – could grow their own crops and be self-sufficient.

Rosie is an ode to the power of women working together. Created as a poem – part rhyme, part evocative verse – from the point of view of a tractor named Rosie, built in America by female factory workers – Rosies – and sent overseas to join the Women’s Land Army. She’s green, with a painted rose, and filled with a strong sense of purpose as she works with the women in Britain to plow fields, grow crops, and feed her new nation. She has a mantra that she clings to, repeated throughout the story: “I plow and I dig. / I dig and I plow. / No matter the job, / This is my vow. It spurs her on, as she plows in the shadow of fighter planes, through mud and muck. When the war ends, she mentors new farm machines, until the day she thinks it may all come to an end when she gets stuck in the mud… but wait! No one is going to abandon our Rosie! Like the Little Engine That Could, Rosie is truly stronger than steel, and roars back to life. A testament to women coming together to achieve great things, Rosie: Stronger Than Steel is an inspiring story about collaboration, cooperation, and determination. An author’s note tells the story of the American factory workers – our Rosie the Riveters – and the British Women’s Land Army. There’s an abbreviated  World War II timeline across the bottom of the author’s note spread. 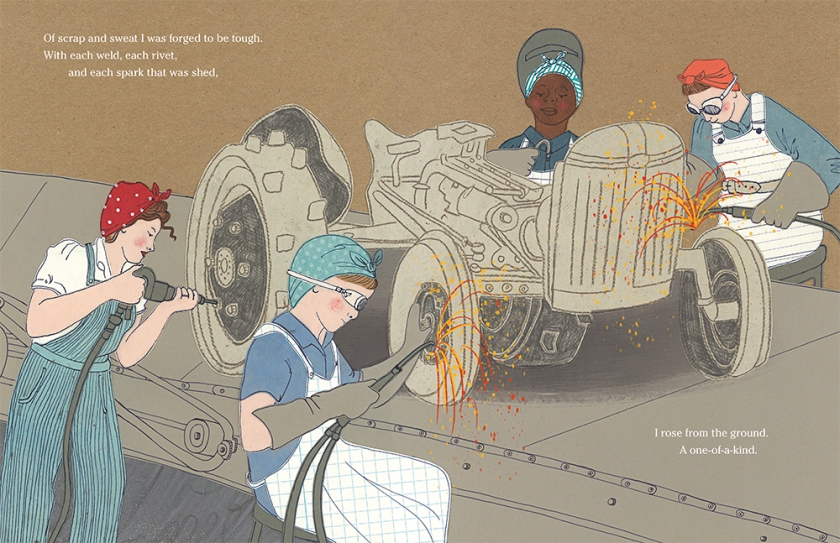 Lindsay Ward’s colored pencil and cut paper artwork is colorful, bright, and filled with images of women (including Rosie!) working together, determined. Her art is so different here, from her colorful, cartoony artwork we see in her Dexter trilogy and Brobarians: here, we see realistic women and farmland, with a sweet-face, cartoony tractor; a blend that shows her versatility as an artist as well as an author. I really enjoyed Rosie: Stronger Than Steel and love this introduction to women’s history, for younger readers.

Rosie: Stronger Than Steel has starred reviews from Kirkus and Booklist. 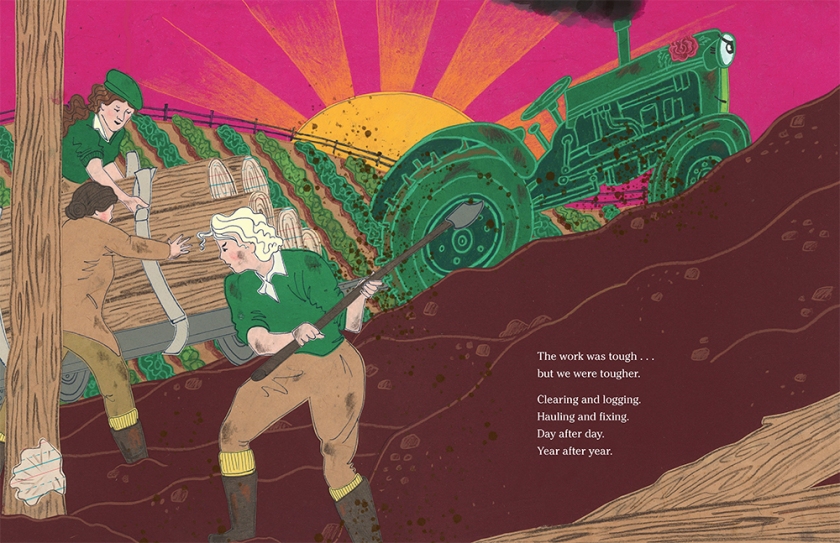 Lindsay Ward is the creator of the Dexter T. Rexter series as well as This Book Is Gray, Brobarians, Rosco vs. the Baby, and The Importance of Being 3. Her book Please Bring Balloons was also made into a play. Lindsay lives with her family  in Peninsula, Ohio, where she often sees tractors from the 1930s and 1940s. Learn more about her online at www.lindsaymward.com.

★“More than the sum of its parts, this is a wildly successful and well-researched shaping of the picture-book form to true historical sheroes.” —Kirkus Reviews (starred review)

★“This ‘little tractor that could’ sort of tale pays tribute to the iconic Rosie the Riveter persona from the US and the British Land Girls of the Women’s Land Army during WWII. Fans of Loren Long’s Otis, Virginia Lee Burton’s Katy, and like sturdy, dependable workhorses will welcome Rosie into the fold, but the historical perspective adds an unusual dimension to her story.” —Booklist (starred review)

“Vocabulary is rich, and the younger set will appreciate the intermittent rhymes. The style of Ward’s colored pencil and cut-paper illustrations reflect the period of the tale. ” —School Library Journal

One lucky winner will receive a copy of Rosie: Stronger than Steel, courtesy of Two Lions (U.S. addresses). Enter the Rafflecopter giveaway!