Tween sleuth Florian Bates is the youngest member of the FBI, all thanks to his TOAST way of working: the Theory Of All Small Things. He sees things most people may miss, and it helps him solve crimes. His newest adventure takes him and his best friend, Margaret, to an exclusive Washington, DC school, where some pranks have gotten a little out of control – and the President’s daughter may be a suspect. Together, Florian and Margaret will discover secret societies and a possible international kidnapping plot. Will TOAST keep Florian and Margaret safe this time?

The Framed! novels are enjoyable, fast-paced, and always give readers a good adventure. The first Framed! novel – Framed! – introduced us to Florian and let us follow along as he busted an art theft ring. Now, he’s got to worry about dinners at the White House, navigating middle school, and figuring out the delicate world of international diplomacy. Mystery fans will love the plot twists, fiction fans will enjoy the character development, everyone will love the TOAST way of looking at things.

Vanished! has a starred review from Kirkus. 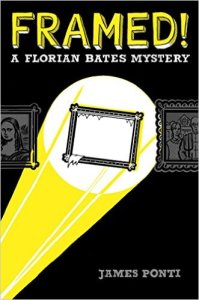 Florian Bates is a 12 year-old seventh grader in Washington DC. He’s the new kid in school, he likes pizza and egg rolls, he’s in the Scrabble Club, and he’s on the FBI’s speed dial. Florian is like a young Sherlock Holmes: he notices all the small details that people often overlook. He’s even got a cool acronym for it: TOAST, short for Theory of All Small Things. His dad designs security systems for museums and his mother restores paintings, so he’s developed an eye for the details.  When he teaches his TOAST theory to his new friend, Margaret, they foil an art theft that saves the National Gallery millions of dollars, Florian finds himself on the FBI’s speed dial – and possibly on a crime syndicate’s hit list!

Framed! is a fun whodunit for tweens. Florian is Sherlock Holmes without the intimidating presence, and Margaret is a sidekick with the promise of becoming more involved in future books. I love the TOAST theory and the detail with which Ponti describes and illustrates various ways to apply it; it’s a great talent to hone and a smart and fun way to communicate it to readers. As the mother of a tween who can stare into a refrigerator and tell me there’s no milk, simply because the container isn’t dancing and jumping into his arms when he opens the door, I thoroughly support teaching kids the importance of noticing the details.

The story is light and fun, and kids will appreciate that, FBI consultant or not, Florian’s parents aren’t letting him solve any mysteries until he gets his homework done. This is a good selection for libraries (personal, school, or public) where kids need a good mystery and are ready to move on from A to Z Mysteries.

James Ponti is the author of the Dead City series, a middle grade series that follows the adventures of Molly, a tween zombie hunter, in New York City.