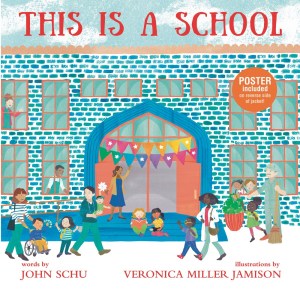 I know, kids are ready to run out the door by now, and you may be thinking, “End of school year storytime? WHAT?” But bear with me, because John Schu’s This is a School is a beautifully crafted look at a community, and how a school is the beating heart of a community. Using brief, definitive sentences, John Schu tells the story: “This is a kid. / This is a kid in a class. / This is a class in a hall. / This is a hall in a school – / WELCOME!” Using repetition, he invites readers to look and listen as he goes through a school day, where children ask and learn, share and help, hope and heal, fail and try; with alternating spreads, we see what happens in the school day, and how it contributes to communities growing, celebrating, transforming. An inclusive group of families and cheerful mixed media artwork present a thriving urban community. What a wonderful way to send learners off into their communities for summer break, and an equally sterling way to welcome them back.

John Schu is a former classroom teacher and school librarian, a former Ambassador of School Libraries for Scholastic Book Fairs, and a part-time lecturer at Rutgers University. His blog, Mr. Schu Reads, is an excellent resource for anyone who loves kidlit. You can find him on Instagram and Twitter.

Veronica Miller Jamison is an illustrator and textile designer who trained as a fashion designer. She is the illustrator of Suzanne Slade’s A Computer Called Katherine. Find more of her illustration work at her website.

This is a School has a starred review from Booklist.

The latest Miss Mingo story celebrates that school milestone, the 100 Days. Miss Mingo’s kindergarten classroom is excited: “One hundred is a big number, so we will celebrate BIG!” Miss Mingo tells her class, and invites the class to share their 100th Day projects, and each of the students show off their projects: 100 shells, a 100-pound baby sibling (it’s a hippo!), 100 teddy bears, even 100 footprints from five different classmates! Loaded with interesting factoids throughout the story, Miss Mingo and the 100th Day of School has great ideas for 100th Day celebrations, many of which will likely take place over Zoom, Google Classroom, or other video chat. My favorite? Making a silly face for 100 seconds! Watercolor and ink illustrations show expressive, happy animal classmates and their exuberant teacher showing off their talented projects. A good book to have ready for 100th Day storytimes. 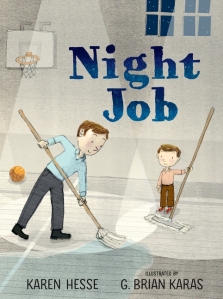 It’s a Friday night, and a boy and his dad head out at sundown for his father’s night shift as a school custodian. The pair ride to school on the boy’s father’s motorcycle, and as Dad cleans, the boy finds ways to himself busy; the two listening to a ball game on the radio. They eat their packed lunch together, and the boy reads to his father until he falls asleep on the couch. When Dad’s shift has ended, he wakes his son up, and they share a ride back home, where the boy cleans out his father’s lunch box, and curls up next to him on the recliner, drifting to sleep in his father’s embrace.

This gentle story shows a special relationship between father and son. The quiet blues and brows and mixed media are calming and provide a feeling that we’re getting a private glimpse into this family’s loving bond. The moment father and son unwrap their sandwiches and eat together is such a touching moment, the son genuinely happy to share this time with Dad as he leans into him, smiling; Dad smiling down on him. Dad gently puts his sleepy son into his jacket as they get ready to leave at 4 a.m. The boy curls into his father, head nuzzled into the crook of his father’s neck; his father’s head is turned away from readers, cheek on his son’s head. It’s a wonderful story that tells readers that quality time is what you make of it.

Narrated by the son, the prose shows a boy so aware of everything around him: the smell of the fish as they drive over the bay; the scent of the lilacs by the school; the sigh of the building as his father opens the door to the school; even what he imagines is the scene at the baseball game on the radio, “where the sun is shining on an emerald field”. Karen Hesse gives readers a feast for the senses and G. Brian Karas uses color to accent special moments throughout the text, be it the green couch that the boy naps on, his red sneakers, or the purple lilacs by the school building.

Night Job is a Junior Library Guild selection and has starred reviews from School Library Journal, Booklist, Kirkus, and the Bulletin of the Center for Children’s Books.

Ordinary sixth grader Becca Birnbaum accidentally power slams a volleyball right into eighth grade It Girl Sloan “Selfie: St. Clair, setting off a chain of events that end up with the principal’s new, very large bra missing – and with the girls being the last ones to have it in their possession

The Principal’s Underwear is Missing (originally titled The Principal’s Bra is Missing) is one of those middle school tragi-comedy of errors that middle graders love. Ordinary Girl ends up with the In Crowd, but for how long, and is everyone happy with the arrangement?

I wasn’t in love with the two main characters. Becca is the run of the mill Nerd Girl who doesn’t stand out preferring to blend in with her small group of fellow nerd friends. Sloan, called “Selfie”, thanks to her habit of shooting selfies at all the lavish parties and locales she attends, is self-absorbed to the point of mania. When Becca, desperate to make up for the volleyball accident that left Selfie in a cast, tries to retrieve a confiscated shopping bag from the principal’s office, she grabs the wrong bag and sets the story in motion. From there, Becca takes the responsibility for the whole incident, while Selfie just meanders through the novel, alternately shooting selfies and crying about being in trouble while letting Becca do all the work. Becca never makes Selfie take responsibility for her own actions, preferring to drag Selfie along on their adventure.

Look, I’m reading this as a 40-something year old Mom who worries about my kids standing up for themselves. Are middle graders going to get a kick out of this book? Yes. It’s funny, it’s got underwear humor, and a kinda-sorta unlikely friendship between two school social classes. It’s a quick read, and perfect for a beach bag take-along. But if you’re book-talking this one, talk about Selfie, taking personal responsibility, and stereotyping in middle grade books. Please.