DC Ink is a fairly new (little over a year) DC Comics imprint, dedicated to middle grade and YA original graphic novels. I only had a sneak peek at Harley Quinn’s upcoming book, Breaking Glass, and haven’t read Mera’s book, Tidebreaker yet, but I received ARCs for both Under the Moon: A Catwoman Tale, and Teen Titans: Raven, and had to dive in.

As with the YA novels in the DC Icons line, every book DC Ink is written by YA royalty, so you just know you’re getting good stuff before you even open the book. They’re illustrated by graphic novel rock stars, so  you’re going to get some phenomenal artwork. Put it all together, and you’ve got a can’t-miss group of graphic novels coming your way. Let’s check ’em out.

We all know Selina Kyle, aka Catwoman, has a multitude of origin stories (the comics, Gotham, Batman Returns, The Dark Knight Rises), but it’s because she’s such a captivating character: authors want to tell ALL the stories, and we want to read them! Selina can be anyone, from anywhere; her fluidity makes her a longtime fan favorite, and in Lauren Myracle’s hands, we get an entirely new Selina: a 14-year-old, living with her mother and her revolving door of awful boyfriends. The current one, Dernell, has been around for a while, and seems to be the absolute worst. He’s verbally and physically abusive, and Selina’s mother won’t say a word against him. When he goes too far in “punishing” Selina one night, she has had enough: she runs away and lives on the streets, stealing what she needs to survive. And she finds that not only is she good at it, but she enjoys it. A group of homeless kids adopts Selina, despite her desire to be a loner; she’s drawn in by Rosie, a selectively mute young girl who bonds with Selina. But Rosie goes missing, and Selina finds herself in an awkward situation as she tries to track Rosie down and keep her safe.

Under the Moon is such a good origin story. The consistent thing about Selina is that she’s always capable, always collected, and always at odds with her desire to be a loner and her desire to help those less fortunate then she is. Her vulnerability is her heart, but you’ll never know it (unless you’re a third party reading her book, amirite?). Bruce Wayne is a supporting character here, and it’s fun to see him and his perfect hair in high school; it’s also nice to see he and Selina verbally spar even back in the day. There’s also an interesting murder mystery subplot, because it’s Gotham City.

The artwork is largely subdued purple-blue and white, with sound effects rendered in yellow for effect. The artwork makes excellent use of movement, perspective, and body language. Grab this one for your YA collections, but use caution if you’re thinking of handing it off to younger readers: there’s domestic violence and profanity in here, so much younger readers will be much better off with Superhero Girls trades.

Lauren Myracle is the author of the New York Times bestselling Internet Girls series, which includes ttyl and ttfn, all of which are written in textspeak. Isaac Goodhart is an illustrator whose graphic novel cred includes Postal and Love is Love. He also has an amazing sketch of Hawkeye and Kate Bishop on his Instagram. 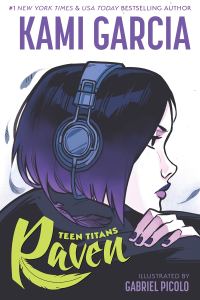 Teen Titan’s Raven speaks to my wannabe goth girl soul. I love her on the original Teen Titans cartoon from the early 2000s, and I crack up watching her on Teen Titans GO! now. Who else could write this character but Kami “Beautiful Creatures” Garcia, who also speaks to my inner wannabe magic-using goth girl? Raven’s orphaned at age 17 when her foster mom is killed in a car accident. Raven moves in with her foster mom’s sister, who seems to know something about Raven that Raven either can’t remember or doesn’t know. She and her foster sister become fast friends, and a cute guy named Max is interested in her, so things should be settling down for Raven, but weird occurrences start happening. When Raven thinks something, it happens: a mean girl trips and falls, just as Raven wishes she would. She can hear what people are thinking. She’s having nightmares. A sprinkling of good, old school Nawlins voodoo and a Deathstroke appearance make Raven’s origin story A-plus reading.

The artwork is mainly black and white, with some color pages splashed here and there. Raven’s trademark purple and black hair shines off the page, and – Raven fans, are you ready? – she wears adorable narwhal pajama pants at one point. There are little DC winks and nudges throughout, including Raven holding a Wonder Woman doll as a child, and there are some amusing girl power-message tees.

Kami Garcia is a bestselling author and cofounder of YALLFest, the biggest teen book festival in the U.S. Gabriel Picolo is a comics artist who’s worked with Blizzard, BOOM! Studios, and DeviantArt.

Get the Raven book. Get all the DC Ink books. Your readers will be glad you did. And really, you should sit down and read through them, too. 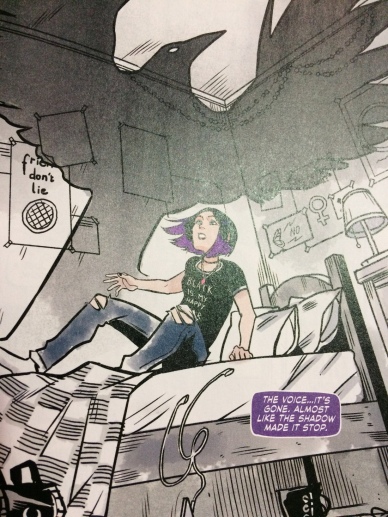