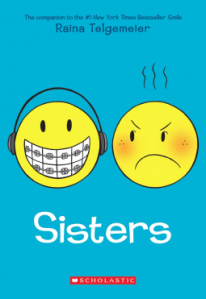 A companion to her Eisner Award-winning graphic novel, Smile, Sisters examines Raina Telgemeier’s relationship with her sister, Amara. The autobiographical novel takes place mainly during a road trip to visit her mother’s family that Telgemeier took when she was 14, with flashbacks that spotlight key points in Raina and Amara’s relationship, leading up to the road trip.

Sisters examines family tension on many levels – it’s not a dark novel, but it does inject realism and humor into situations many of us know all too well, and Ms. Telgemeier’s soft cartoon art is like comfort food for my psyche.

Smile still continues to be one of the most popular graphic novels in my library. I’m positive that Sisters will join it. 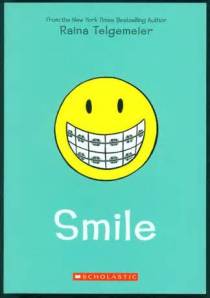 Raina Telgemeier’s memoir, Smile, is a coming-of-age memoir that’s framed by the night sixth-grader Raina sustained an injury to her mouth that led to a series of surgeries and orthodontia. Throughout middle school and high school, Raina endures braces, surgeries, retainers, and even headgear. She becomes a target for her friends’ teasing, which leads to her pulling away from them and embracing her love of the artistic. When she finally realizes that her friends aren’t the people she wants to surround herself with, she stands her ground and moves on.

Smile is one of those books that everyone should read, kid or adult. It’s all about fair-weather friends, enduring what feels like the end of the world, and ultimately, finding your own voice. It’s empowering, whether you’re 12 or 92, because it’s something we need to be reminded of, from time to time – “it”, whatever it is, won’t last forever, and the people you surround yourself with may not be the best for you. Dig deep down into yourself and love yourself enough to get through it.

The cartoon art makes the story even more accessible,with friendly-looking, expressive characters and warm colors throughout. The endpapers resemble a yearbook -in fact, Ms. Telgemeier used her yearbook signatures for the book – with signatures and well-wishes from friends, setting the tone for the book.

Smile has received numerous accolades – deservedly so! – including winning the Eisner Award for Best Publication for a Teen Audience (2011), the Dorothy Canfield Fisher Award (2012), and the Maine Student Book Award (2012). Smile was a finalist for the Children’s Choice Book Award (2011) and has received designation as an ALA Children’s Notable Book (2011), an honor book from the Boston Globe-Horn Book Awards (2010), a Kirkus Best Book of 2010, and a New York Times Editors’ Choice (2010).

There are lesson plans on the Web that allow educators to bring Smile into the classroom. Scholastic offers one on their site, along with a template for students to create their own graphic novels; The Graphic Classroom offers some great classroom discussion tips using the book.

A companion book to Smile, called Sisters, which will be published in August 2014 and will examine the relationship between Raina and her sister, Amara, who briefly appears in Smile. 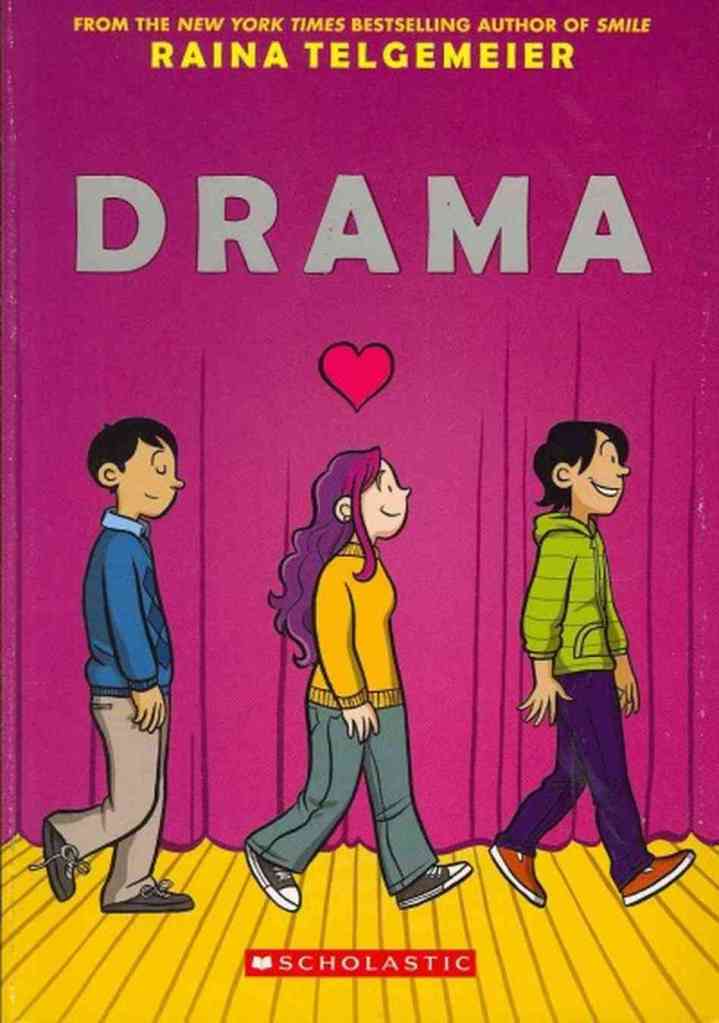 Drama geeks have their day in Raina Telgemeier’s Drama, a winner of the 2013 Stonewall Book Award from the American Library Association. Seventh-grader Callie loves the theatre, even if she can’t hold a tune with a bucket. She’s active on the crew with her school’s theatre group and is set designer for their upcoming production of Moon Over Mississippi. But, as with most tweens, there’s drama in Callie’s personal life in addition to the drama unfolding in the production as she crushes on Greg, who doesn’t seem to be able to give up his on-again, off-again girlfriend Bonnie. She becomes fast friends with new-to-the-school twin brothers Justin and Jesse, both of whom get involved in the production, and she finds herself falling for one of the twins… but he’s sending mixed messages. Can Callie use her shoestring budget to pull together a great set, and figure out her crush drama at the same time? 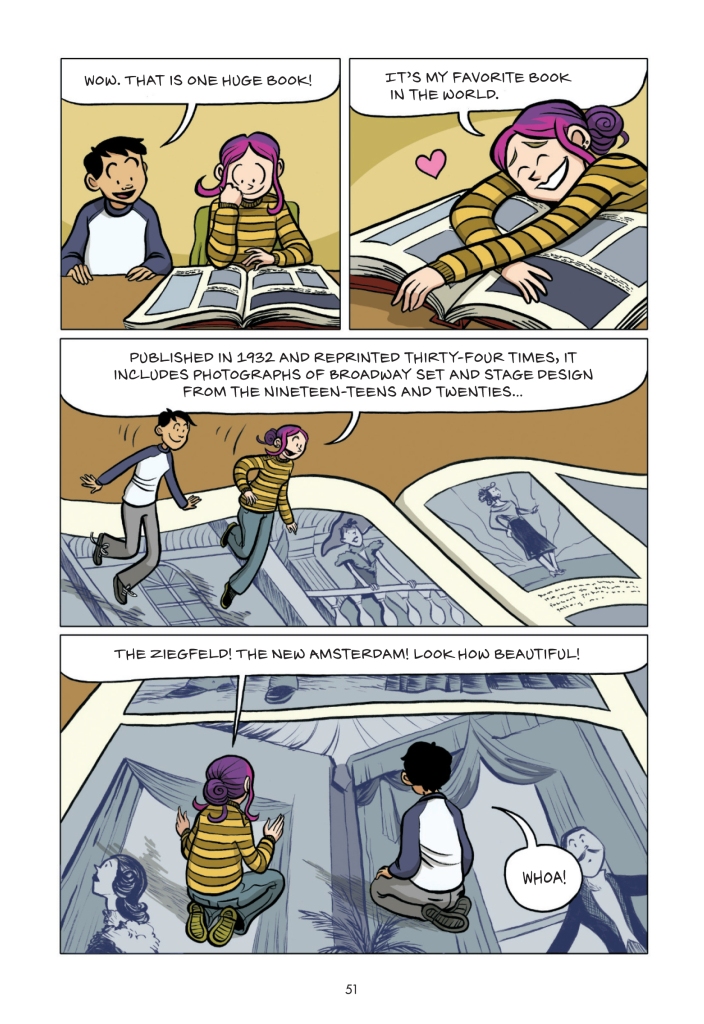 Raina Telgemeier won an Eisner Award for her previous graphic novel, Smile – another tween drama – and she knows tweens. She can tap into the not-so-in-crowd with ease, telling a great story about the kids you may not see at the cool table, but who aren’t at the angsty goth table, either. Their drama is self-contained, part of growing up, but these seem to be overall happy kids, most of whom have a decent idea of who they are or are on their way to figuring it out. She includes positive, honest-feeling portrayals of LGBT characters. The cartoon art allows the reader to relax into the story and just melt into the setting. I enjoyed spending time with Raina’s characters, and look forward to meeting some more when I pick up Smile.