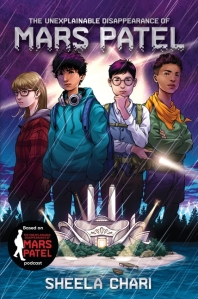 Mars Patel is a middle schooler with a penchant for getting in trouble. He and his friend, Aurora, love pranks and practical jokes that land them in detention, but when Aurora disappears – followed by his friend, Jonas – Mars is determined to find out what happened. All signs are pointing toward Oliver Pruitt, a tech genius (think Elon Musk) and Mars’s hero. Pruitt runs an elite school for the best and brightest; a school that Mars’s own school tests for every year, and he has a podcast that seems to be dropping hints tailor-made for Mars. Mars and his group of friends – Toothpick, JP, and Caddie – start digging and investigating, which puts them on Pruitt’s radar, and that’s when the kids learn that Oliver Pruitt may not be the benevolent mentor everyone thinks he is. Based on an award-winning podcast, this is the first in a series that mixes mystery, sci-fi, and a little touch of the paranormal.

There is so much going on in this book that I didn’t want it to end! Mars and his friends are a great group of kids; well-written and fully realized on the page. There’s a lot happening that we don’t know about in this first volume: what does Mars’s mom do for a living, for starters? All roads in this book lead to Oliver Pruitt. There’s science, conspiracy theories, and, at its heart, an engrossing character-driven story told in narrative, e-mails, and text messages. The end will leave you impatiently waiting for the next volume, and I’ve just subscribed to the podcast to learn more. A definite win for bookshelves and readers.

The Unexplainable Disappearance of Mars Patel has a starred review from School Library Journal. You can read a sample and get a free, downloadable discussion guide at Candlewick’s website.

If you haven’t listened to Season 1 of the Limetown podcast, I highly recommend it.  It’s a creepy, fictional Serial-type podcast, where a journalist named Lia Haddock investigates a research community where over 300 men, women, and children disappeared, virtually overnight. One of the scientists was uncle, Emile Haddock. The second season’s just started, and there are only six episodes in the first season, so you have time.

The Limetown novel, written by the podcast’s creators, is a prequel that works as a YA crossover novel. Lia and Emile Haddock are the central characters here; Lia is a teen at the time of the novel, which takes place in two time frames: Lia’s adolesence in the immediate aftermath of Limetown, and Emile and Jacob’s – Lia’s father – adolesence and early adulthood. We learn about the roots of Limetown, and Emile’s path in getting there, and we get the formation of Lia’s burgeoning journalism career, what led her to investigate Limetown, and allusions to her being part of the Limetown event.

There are some glaring inconsistencies between the book and the podcast which didn’t sit right with me, to be honest. Lia seems to end the book with a lot more information than she starts out the podcast with, and at points, the narrative tends to lag. Lia’s mother emerges as a fascinating character that I want to learn more about in future episodes of the podcast. I liked discovering characters from the podcast in this novel, but would rather have had a prequel about Limetown itself, rather than have it merged with Lia’s story. Maybe that’s in store for another book? If you’re a fan of the podcast, give the book a shot.

Today, I’ve got a guest post from my colleague, Amber; she’s the teen librarian at my library, and we share a love of Marvel Comics and movies and good YA fiction. She recently read Sadie, by Courtney Summers, and was dying to talk about it. Take it away, Amber!

Sadie Hunter, a 19-year-old girl, disappears after her 13-year-old sister is murdered. The girls’ surrogate grandmother contacts West McCray, an NPR-like radio host, to find her. Sadie, by Courtney Summers, flips between the script of McCray’s resulting podcast series and the POV of Sadie herself as she follows clues to track down the person she believes killed Mattie.
This is a dark story with few slivers of light to break the tension. You experience Sadie’s hungry, desperate, furious mindset firsthand. West McCray doesn’t want to get involved. “Girls go missing all the time.” But his producer pushes him, and soon he’s too involved to turn back. Sadie went through heavy things as a little girl. Be prepared for strong mentions of substance abuse (by mom) and parental abandonment. Child molestation is a heavy theme throughout. (Sadie is a survivor, and much of her actions are driven by her anger.)  Sadie intends to murder Mattie’s killer when she finds him. Along the way, her singular focus puts her into dangerous situations, made worse by her constant starving state and lack of sleep that affects her judgment and reactions. A scene when she goes “undercover” as a new teen in a town where she has a lead offers a view of the kind of popular teen she might have been if everything and everyone in her life wasn’t so messed up. In that short moment, she makes friends, but hours later destiny throws her another horrifying curveball.
There are many heartbreaking aspects of this story, but the idea that the sisters could have been saved if only someone had listened to Sadie when she was a young girl and taken her seriously is one that will keep readers up at night.
Sadie is a powerful book that teens who enjoyed Thirteen Reasons Why could get into easily. It doesn’t have a pat ending, and discerning readers may notice that some of the conclusions McCray reaches don’t line up with Sadie’s, which leaves the armchair detectives among us to draw their own answers. These moments help alleviate the few times it feels that McCray’s sections are repeating Sadie’s, especially as he gets closer to tracking her down.