Take a walk and listen on any given day, and you’ll hear a cacophony of birds: tweets, chirps, screeches, and coos abound; even city kids can hear a dove coo, a pigeon scold, and a blue jay (like the one who likes to argue with the squirrels, right outside my window). Who is Singing? is author Janet Halfmann’s tribute to some colorful, musical birds, all identifiable by their songs. Using each bird’s defining song, repetitive verse, and a noticeable characteristic for each bird, Janet Halfmann introduces readers to the gentle art of bird-watching and bird-listening, giving readers 11 fairly familiar birds to start out with. You’ll recognize pigeons, “begging for treats along a city sidewalk”; “bully loud and bold” blue jays screaming; cheery chick-a-dees, “dressed up for dinner in a black cap and bib”, and more. Ms. Halfmann encourages the birds to “take a bow”, making for a fun readaloud where you can invite your littles to take a bow – or let a bird puppet or flannel take their own bows when you announce them, too.

Chrissy Chabot’s illustrations are bright and lovely, photorealistic birds that will help readers more easily spot and identify them the next time they’re out and about. A lovely little story to read out loud, and works well with a lapsit. Print out some coloring pages and let the kiddos envision their own colorful birds and make some music of their own! 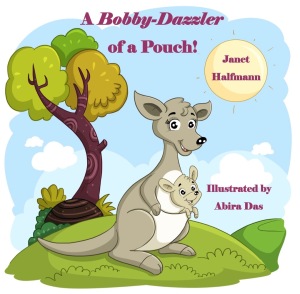 A little gray kangaroo wants to wander off on his own, but can he find his way back to Mum’s pouch? He can if he and his friends decorate it so her pouch stands out – a real bobby-dazzler! Award-winning author Janet Halfmann‘s newest book is an amusing little story of a kangaroo and his mom, and a bunch of Austalian animal friends that give Mama Kangaroo a bedazzling. The phrase “bobby dazzler” is British slang for somethin outstanding, striking, or showy, and boy, does her pouch get the showy treatment! A lorikeet and an emu contribute some feathers; a sugar glider shares some blossoms, even an echidna contributes some spikes – yikes! Little Joey has a lot of friends, but he finds a way to include everyone’s contribution. It’s a good thing, too: the easy-to-spot pouch does the trick when he has to dash for Mama when a dingo makes an appearance!

The artwork is cartoony and cute, with smiley animals and a bright Australian landscape. A little note about Australian kangaroos accompanies fun kangaroo facts, and lists of Australian words, animals, and plants. A cute read-aloud for animal fans, especially fans of those ‘roos! Have some Aboriginal-inspired coloring sheets available for storytime.

Janet Halfmann is a multi-award-winning children’s author who strives to make her books come alive for young readers and listeners. Many of her picture books are about animals and nature. She also writes picture book biographies about little-known people of achievement. Janet has written more than forty books for children. Visit Janet at: janethalfmannauthor.com