Originally published in 2013, Map of Days follows a clock-obsessed boy, who wonders where his grandfather goes when he disappears into a door on his grandfather clock. One night, the boy steps into the clock and discovers a fantastic world, where the face of Earth, the Sun, and the love story that joins the two. It’s a fable contained within a narrative, beautifully illustrated for readers of all ages. Children under the age of 10 will enjoy the colorful art, but may be lost by the story, which isn’t always linear and can be confusing.

The artwork is beautiful, and the fable of the Earth and the Sun is bittersweet. Art fans will want this book on their shelves for the sheer beauty within; fantasy fans will happily follow the boy on his journey.

Robert Hunter is a graphic novelist and illustrator who also wrote The New Ghost (2011). Find more of his illustration work at his website. 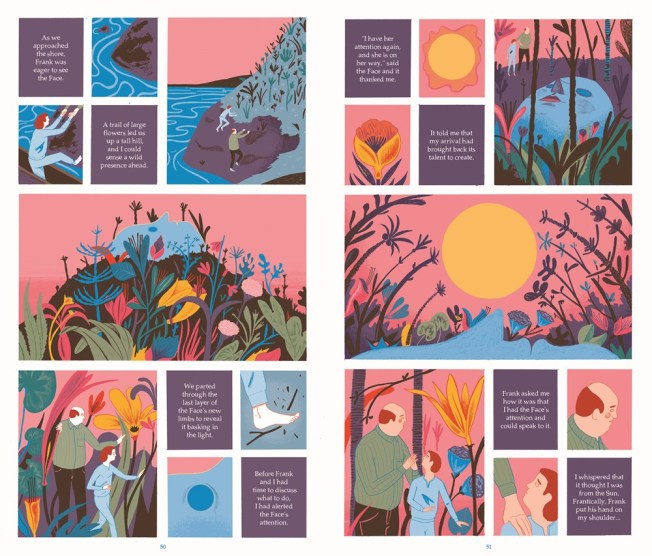 This gorgeous companion to Braun’s Wild Animals of the North (Nobrow, 2016) introduces readers to animals in the Southern hemisphere. Organized by continent: South America, Africa, Asia, Australia, and Antarctica, readers will enjoy the beautiful, colorful illustrations. The emphasis here is on the illustrations, making this a great starter book for younger children; caregivers can read the short passages on featured animals, which offer fun facts. For example, while most know that a male lion’s mane is his crowning glory, did you know that female lions prefer males with more beautiful and lustrous manes? And that other males will hold back when a male with a more impressive mane appears?

The art is stunning. Braun’s illustrations are geometric, with strong lines and rich colors. There is a wry sense of humor in some – the lion’s lush mane, for instance – while others, like the breaching humpback whale, are breathtaking. A waddle of penguins, under a snowy sky, stand in the stark shadow of glaciers. Braun captures habitats with the same beauty the he sees in the animals themselves.

The $35 price tag may be a bit steep for some readers, especially those who are looking for more information than artwork (but that’s what libraries are for!), but this book is gorgeous for wildlife lovers and art lovers. For more of Dieter Braun’s illustrations, make sure to visit his website. 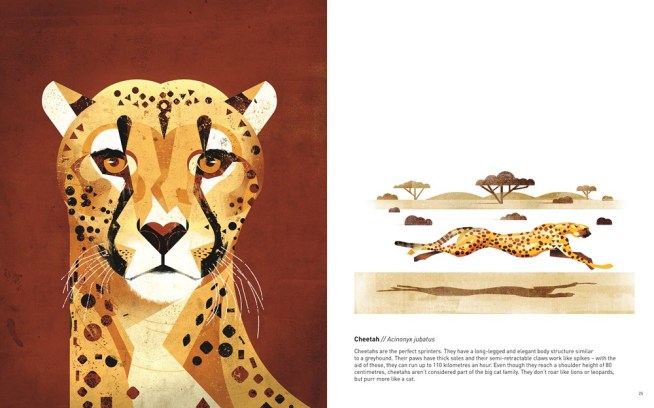 The blue-haired adventure-seeker is back in her sixth installment! The time out, Hilda’s grounded, but that’s not stopping her. The only problem is that when she sets out for her latest adventure, her mom catches her and ends up along for the trip. Hilda and her mom are at each other while lost in Trolberg, the land of the trolls, and Hilda has to figure out how to get them both home safely – as a troll!

The Hilda series is such a good graphic novel series for all-ages readers. There’s fun, adventure, and a strong Scandinavian influence that draws readers right in, takes hold of their imaginations, and doesn’t let go. The cartoony art is fun and vibrant and Hilda’s sense of adventure is great. I love that Mom got into the act in this adventure, and I love that she and Hilda bicker through a good portion of this adventure, because it’s fun and yet it’s real. Yes, you’re in a land of trolls with your daughter, but she was grounded is disobeyed you, and now you’re both in this mess? I’d be giving my son grief all the way home.

I met Hilda when I found her first adventure on the shelves at the first library I worked at about two years ago. I need to catch up on more Hilda, though; she’s great fun, and I love introducing graphic novel fans to her adventures. Booktalk this with your other Hilda books, plus other great girl-power graphic novels like Zita the Spacegirl, Cleopatra in Space, and Phoebe and Her Unicorn. For tween readers , talk up the Zaria Fierce books, which also incorporate Scandinavian myths (trolls!) and stars another strong, smart heroine.

Have a look at some of the art from Hilda and the Stone Giants, courtesy of the Nobrow website. 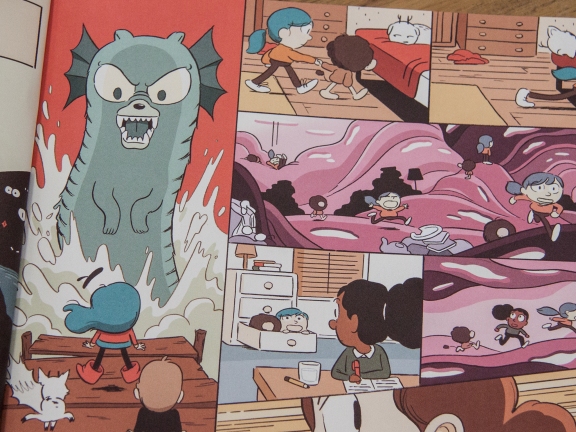 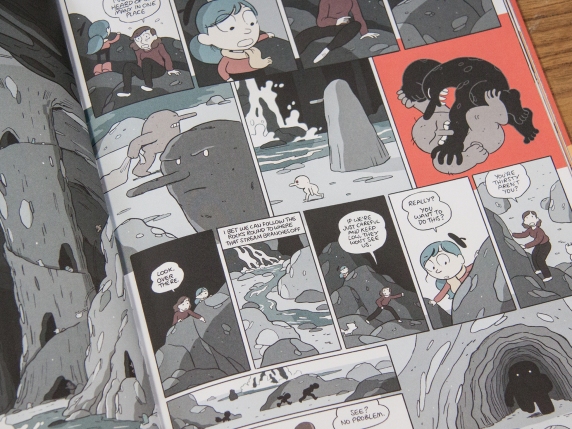 More great news! Hilda is coming to Netflix in 2018!

Kids love sharks. Owen Davey’s Smart About Sharks is going to jump off the shelves and demand to go home with these kids. What’s not to love? There are great infographics giving out wild information (wait until you see all the different kinds of teeth found in sharks across the world), bright, brilliant artwork with a retro feel to it, and tons of facts about sharks, including a debunking of their status as maneaters: if you’re on a surfboard, you look like a seal, and the book has the artwork to prove it.

I love Nobrow/Flying Eye books. They produce beautiful art books that appeal to kids. They manage to find amazing authors and illustrators who know how to attract a reader’s attention and provide facts in a way that is exciting, interesting, and fun. I’ll add this to my nonfiction collection, and I’m buying one for my own home. My 3 year old can’t get enough of this book, and can tell me which shark is a basking shark, and that a megalodon tooth is as big as a person’s head. No, he didn’t read that by himself, but he remembers it every time he sees the basking shark picture, and the infographic that shows the sizes of a great white shark and human being in proportion to a megalodon. Like I said: kids love sharks, and this book knows it.

Add this to collections where animal books are popular.

One Day On Our Blue Planet… In the Antarctic, by Ella Bailey (April 2016, Nobrow), $16.95, ISBN: 9781909263673
Recommended for ages 3-7
Join an Adélie penguin chick as she gets breakfast from her mother and heads out into the giant world on her own! We see her jump into the water and swim, searching for food, encountering whales and seals, and making sure to avoid becoming someone else’s dinner! Along the way, readers learn about how penguins like our little Adélie friend will travel for years before returning to solid land, how penguin bodies develop to keep warm, what they eat, and meet other types of penguins and sea animals.
Adorable, child-friendly, cartoony illustrations introduce us to all sorts of sea life, including a warty squid porpoise, Antarctic krill, leopard seal, and humpback whale. This is a fun introduction to the Antarctic for young audiences, with an animal kids already love: Penguins! Books like this help turn kids on to nonfiction – pair it with some Salina Yoon for a great penguin storytime, or have a nature read-aloud by pairing with the first book in the series, One Day On Our Blue Planet… In the Savannah.

Ella Bailey is an illustrator and writer. You can see more of her illustrations at Ohh Deer, and you can see some more art from One Day On Our Blue Planet… In the Antarctic right here. 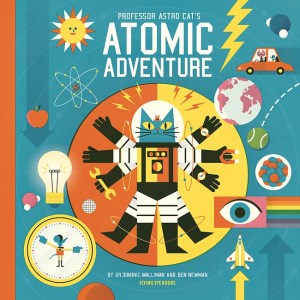 Think you’re too young to understand physics? Professor Astro Cat is here to show you how awesome the science of matter and energy is. Using language and examples that beginning learners will understand, with retro-futuristic illustrations that will catch kids’ eyes, this is a great start for kids who want to go a little bit beyond the basic states of matter and find out more.

This is the second Professor Astro Cat book – the first, Professor Astro Cat’s Frontiers of Space, looked at our planets, solar system, gravity, and extraterrestrial life – and is a great addition to libraries that want STEM books available to all readers. I’ve got maker books, I’ve got robotics books and LEGO books, but physics was an area I’ve typically shied away from for the children’s room (mainly, because most of my personal physics knowledge comes from Big Bang Theory episodes). Professor Astro Cat and his friends are patient, though, and never talk down to their audience. With direct language and discussions on subjects like why snowshoes help you walk on snow, rather than sink into it, and why rainbows appear when it rains during the daytime, kids will be excited about science – and that’s what we want!

Author Dr. Dominic Walliman has a Ph.D. in Quantum Device Physics, and has taught physics to all levels of students – and has even taught at festivals. Ben Newman is an award-winning illustrator who also did the artwork on Astro Cat’s app. Newman’s website is loaded with his amazing retro art and book trailers – go check it out! And check out some more of Professor Astro Cat’s Atomic Adventure, right here! 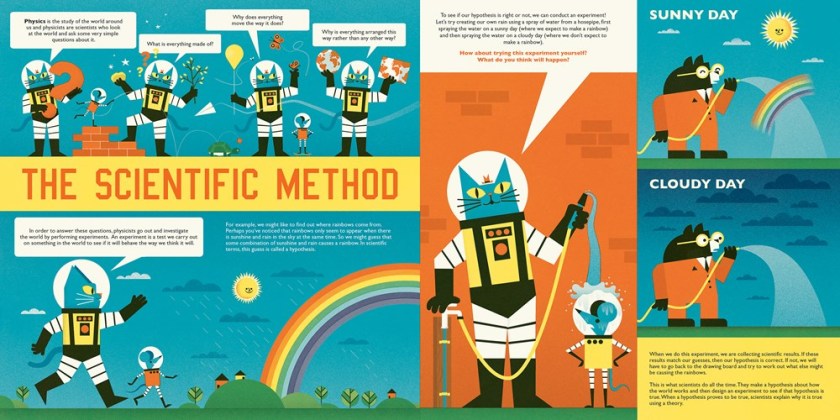