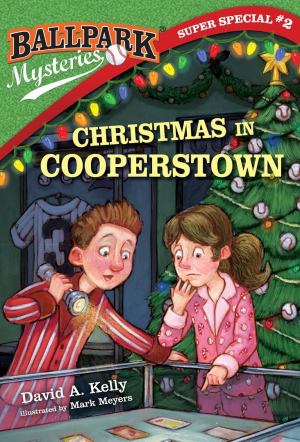 Best friends Mike and Kate are volunteering to wrap presents for a charity, Cooperstown Cares, at the Baseball Hall of Fame. As a thank you, they and their friends are invited to a sleepover at the Hall of Fame, which is pretty fantastic. It’s a good thing, too – Mike notices that the Honus Wagner card – a rare baseball card that can go for millions of dollars at auction – has been stolen and replaced with a fake! He and Kate have to track down the clues, find the card and the culprit, and deliver the charity’s gifts on time. Pretty big order!

Sports fans will really enjoy the tidbits of sports history here. I was interested in the science behind discovering the fake card, and using his dad’s business as a baseball card dealer opens the door to some fun trivia and facts throughout the book. “Dugout Notes”, a regular feature in the Mysteries, on Cooperstown and the National Baseball Hall of Fame finish up the book, along with a recipe for All-Star Blue Chip Muffins, which have a little cameo in the story.

Readers can pick up Christmas at Cooperstown without having read other Ballpark Mysteries; there’s enough exposition that you can easily get into the groove of things. Black and white illustrations by Mark Meyers keep things interesting and moving along.

I got to meet David Kelly at KidLitCon this past weekend and he is the nicest guy! It’s always a bonus when you find out that an author is pretty darn cool on top of being a good writer. He was kind enough to pass on a set of his MVP series for my library kids, too! 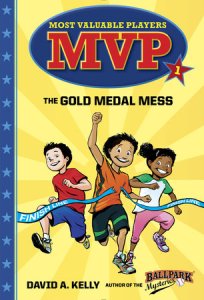 MVP – Most Valuable Players – is another sports mystery series for intermediate readers; like Ballpark Mysteries, you can dive into each one separately, with no stress. In the first story, The Gold Medal Mess, we meet the MVPs on the opening spread, where we get their “stats” via an illustration and quick character description: Max is a great athlete and detective; Alice is an archery ace and animal lover; Nico can’t wait to practice and play; Luke loves to exercise his funny bone, and Kat, Luke’s twin sister, captures the best game-day moments on camera. The kids are getting ready for their annual school Olympics, but someone is leaving threatening letters, telling the school to cancel the Olympics or else. When things start going wrong on the big day, it’s up to the five friends to figure out who’s causing the trouble and save the day before someone gets hurt.

Each MVP book covers a different sport and features black and white illustration. The cast is a diverse, all-star group of kids with different interests and talents, and who work together to solve mysteries, help others, and take on bullies. Each book includes bonus facts on each featured sports: The Gold Medal Mess has Olympics facts and photos; other books have terms and diagrams. I’m putting these up on the “NEW” shelf tomorrow, and I expect they’ll be gone just as quickly as I get them up there. A good add to sports fiction and mystery collections! 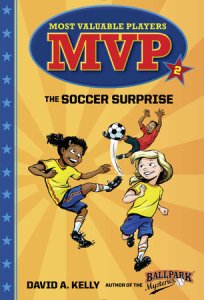 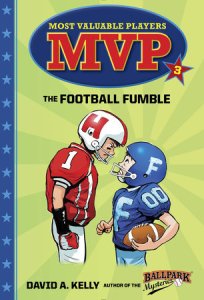 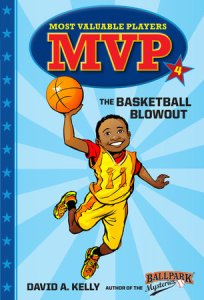