There once was an ugly dumpling who didn’t look like the other dumplings. This made him feel really badly, until along came a cockroach, whose heart reached out to the dumpling’s, and showed him the beauty of the world.

Sounds familiar, right? Well… kinda. The latest update of the classic Hans Christian Andersen fable The Ugly Duckling, The Ugly Dumpling looks beyond the surface to tell a sweet story about friendship, being different, and being proud of it. The dumpling, living in a restaurant, was uneaten and ignored because he didn’t look like the dumplings around him, but when he takes up with the cockroach, he realizes that the world around him is beautiful and so is his place in it – and he learns that he’s not a dumpling like those boring other guys after all! But the sweetest part of the story comes when the cockroach is discovered by the other food and the customers – and Dumpling realizes that it’s his turn to reach out to a friend in need.

Told in short, sentences with key words emphasized by beautiful artwork, like the “hiss” of a wok and a “thwack” of a cleaver, The Ugly Dumpling teaches kids not only that it’s okay not to fit in, but encourages them to accept one another’s differences – celebrate them! – and reach out to anyone who may feel ostracized and alone. I can’t think of a kinder, more valuable message to teach our kids these days.

Shahar Kober’s art is a perfect complement to Stephanie Campisi’s sweet story. I’m not a bug fan by any stretch of the imagination, but he manages to create a bug companion that is adorable and as touching as the cockroach in Wall-E (and that’s a HUGE thing for me to say). And think about it – what creature is as reviled as a roach? Ratatooie made mice in the kitchen a cute thing, we all love Desperaux, so by taking a cockroach – no doubt someone who’s all too aware of being an outsider and disliked – and having him reach out to a poor dumpling to say, “It’s okay – there’s so much beauty in the world around you,” is a beautiful gesture borne out of a true understanding of The Golden Rule. Kober manages to make a dumpling sympathetic and emphathetic, with kind words wrapped around him to give him life.

I love this story and can’t wait to read it with my preschoolers. It’s a great add to libraries and collections that promote tolerance and kindness among children, and maybe some adults could stand to learn a thing or three from its message, too. 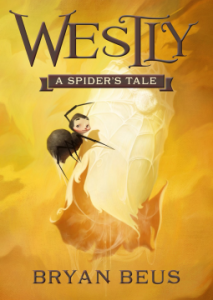 In a contained garden of a glass chandelier, a young caterpillar is born into royalty. Destined to inherit the crown of the Monarch Butterfly kingdom, he is spoiled and naïve until he emerges from his cocoon – and he’s not exactly what he expected. Instead of a regal monarch, he’s a spider. Horrified by his appearance and afraid he’ll be ostracized from butterfly society, he runs away and lives down below, among the “dirt eaters” – the bugs that live below, on the ground. Not knowing he comes from the arrogant butterflies, they take him in and teach him how to live – but what Westly doesn’t realize is that he holds the key to uniting both societies.

Blending a graphic novel feel with a moral fable storytelling voice, Bryan Beus’ debut novel is a great read for middle graders. It’s kind of A Bug’s Life meets The Ugly Duckling, with a kind-hearted, unworldly main character who goes on a classic hero’s journey to grow up, mature, and come into the leader he’s meant to be. There are wonderfully classic elements here: the villain, the wise old sage, and the curmudgeon with the heart of gold being just a few touchstones that children and adults alike with recognize and embrace. Black and white sketches throughout the book hold the reader’s interest and have a comforting, classic feel. 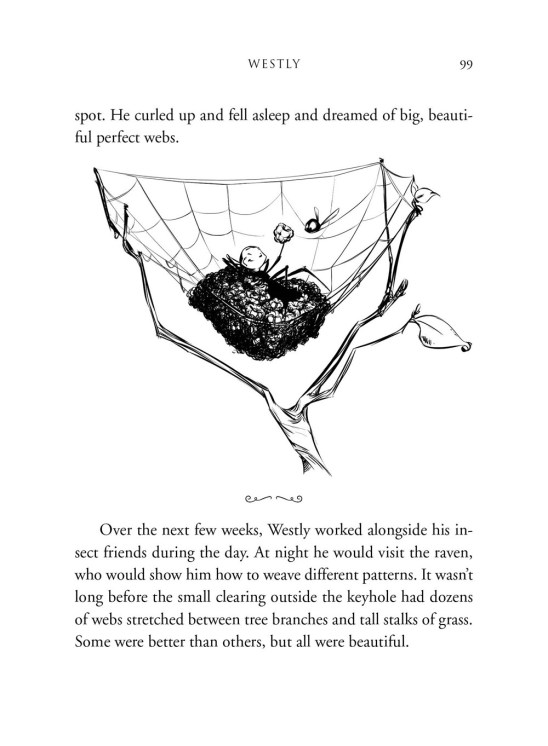 This is a solid choice for school libraries and classrooms, especially for middle grade read-alouds and units on fairy tales and fables. Animal fiction always does well in my library, so I know this one will be happily received.

Bryan Beus is the winner of the Kirchoff/Wohlberg Award from The New York Society of Illustrators. His author website offers a sneak preview of Westly‘s first two chapters, plus an adorable webcomic called Peter and Li. Westly is Mr. Beus’ first book, but I’m hoping to see more.