We all know and love our pets: dogs, cats, birds, fish, reptiles of all sorts… but have you ever heard of having a pet alligator (Lyle, Lyle, Crocodile notwithstanding)? The Caiman is a loving story of a gentle man who opened his heart and his home to an orphaned baby caiman – a river caiman – and received a lifetime of love in return. 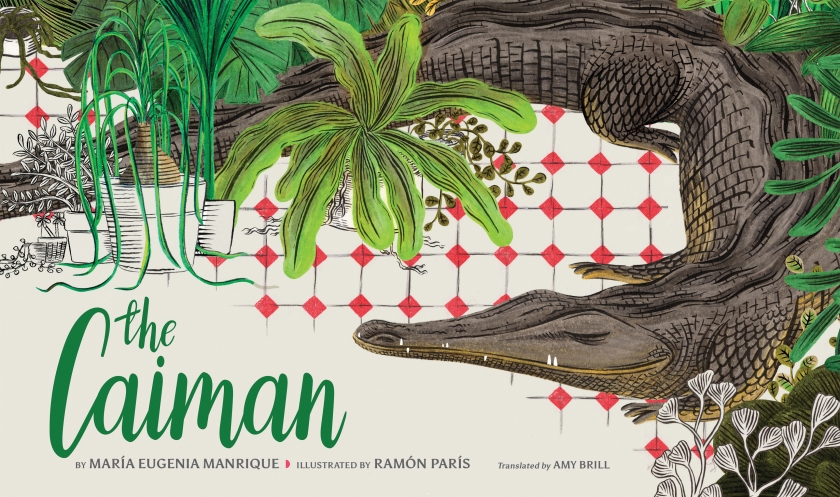 Set in San Fernando de Apure, a tiny riverside city in Venezuela, the story begins with an orphaned alligator, discovered by a little girl during a game of hide and seek. A jeweler and watchmaker named Faoro offers to take the little alligator – no bigger than the palm of his hand  home, and tells the city’s children they can come visit and play with her whenever they’d like. The alligator, who he names Night for her dark skin, is a star attraction as adults and children alike visit to get a look at the pet alligator, who sleeps in her human’s bed and plays with the children. When Faoro falls in love, he introduces Angela, his intended, to Night, who approves. Years pass in a home filled with love and laughter, but when Faoro falls ill and passes away, Night goes into hiding, grief-stricken, until Angela coaxes her out with song. It’s a beautiful story of the connections we find with nature, often in unexpected moments. Back matter includes photos of the author, who was one of the city children who played with and even rode on Night’s back; bios on the illustrator and José Faoro round out the story.

The artwork is a wonderful mix of black and white and colorful illustration, all contained in the same spreads. Ramón Paris has a vintage feel to his artwork, and infuses the natural world with vibrant color and his human subjects, black and white with colorful clothing, stand out against their backgrounds, making the point that we fit into the world around us, never quite blending in, but living and moving within it.

Amazon Crossing Kids has a gift for finding gems in children’s literature across the globe. Don’t miss this one. The Caiman has a starred review from Booklist.

One lucky winner will receive a copy of The Caiman, courtesy of Amazon Crossing Kids (U.S. and Canada addresses). Enter the Rafflecopter giveaway!

★“The striking illustrations…have a wild and whimsical feel about them, featuring lush foliage and expressive characters, including the eventually enormous caiman. It’s a memorable and unexpected demonstration of the universality of love, grief, and kindness.” —Booklist (starred review)

María Eugenia Manrique is one of the girls portrayed in this story. She rode the caiman when she visited her family in San Fernando de Apure. She was born in Caracas, Venezuela, and currently lives in Barcelona, Spain. She studied fine art in Mexico City, specializing in xylography and engraving; Eastern painting at Nankín University, China; and sumi-e and calligraphy at the Nihon Shuji Kyoiku Zaidan Foundation in Japan. Her work has been exhibited in museums and galleries around the world. The Caiman is her first children’s book. For more information, visit her website: https://mariaeugeniamanrique.wordpress.com/.

Ramón París was born in Caracas, Venezuela, and as a child lived in Barinas, a plains state like Apure, where he also heard the story of the caiman. He currently lives in Barcelona, Spain. Hismost recent book for children, Duermevela, was selected for the Bologna Book Fair Illustrators Exhibition. His books have been recognized with honors including Los Mejores del Banco del Libro and  the IBBY Honor List, among others, and they have been translated into numerous languages. Visit him at: ramon.paris.

Amy Brill’s fiction and nonfiction have appeared in numerous publications including the Washington Post, Medium, Real Simple, Oprah.com, and One Story. Her first novel, The Movement of Stars, was published by Riverhead Books. A native New Yorker, Amy lives in Brooklyn with her husband and two daughters