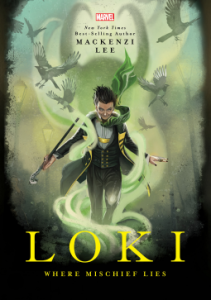 Disclaimer: I am a rabid Marvel and Loki fangirl. When I heard that Loki was getting his own YA novel, I shrieked just a little bit, and camped out on NetGalley and Edelweiss until the DRC gloriously appeared. In short, I’ve been really, really, flipping excited for this book! So let’s get the show on the road.

Loki is Thor’s younger brother, and still hoping that his father, Odin, will see that he’s just as capable of heroism – and possibly, the throne of Asgard – as his older, golden brother. He and his best friend, the sorceress-in-training Amora, find themselves in deep trouble when they accidentally destroy a powerful artifact. Amora takes the blame for Loki and finds herself banished to Earth; essentially a death sentence for a magical being, because her powers will wither and die slowly. Fast forward some years later, and Loki is sent to Earth to investigate a series of murders in Victorian London. He joins forces with a watchdog organization that believes otherworldly magic is involved in the murders. Dare Loki hope that Amora is still alive and in London? And if she is… is she connected to the murders? Our (well, my) favorite son of Asgard is at a crossroads in this first adventure.

I thoroughly enjoyed Where Mischief Lies. Mackenzi Lee has given us a delightful mix of Marvel/Tom Hiddleston Loki with a sprinkling of gender-fluid Norse myth Loki. He prefers high-heeled boots, sees Midgardian (Earth) society and its concern with binary sexuality and relationships ridiculous, and he’s got a wonderfully snarky way of interacting with people, especially those he sees as below him, which is… basically, everyone. He is also a vulnerable, often fragile, young man coming into his powers and frustrated by the lack of attention from his father, who prizes only traditional masculinity and strength rather than magic and wisdom. You can see Loki’s trajectory from this story to Earth’s favorite villain in years to come.

The writing is page-turning, with witty dialogue, a creepy whodunit, and slow-burn heartache throughout. My head spun a little bit as I tried to connect the dots from myth Loki to present-day Loki (What about Sigyn? His monstrous children? That whole situation with the cave and the venom?), but Mackenzi Lee deftly maneuvers around these questions with an interesting explanation that works for me.

I’m a fan of Mackenzi Lee’s God of Mischief. I’m looking forward to seeing who else she takes on in the Marvel Universe. A solid must-add to collections. 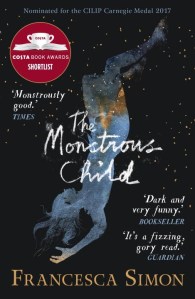 Being the daughter of a giantess and the god of mischief is hard enough, but being born as a half-corpse on top of it? No wonder Hel, daughter of Loki and Angrboda, has a chip on her shoulder. Her older brothers are a snake and a wolf, her half-brothers are human – but they’re jerks, and her father’s no prize, whether or not he’s a Marvel and Tumblr heartthrob in another universe.

So goes the story of Francesca Simon’s The Monstrous Child. Narrated by Hel herself, it’s Neil Gaiman’s Norse Mythology for the middle school set. We read about her anger at Odin’s casting her into Niffelheim to rule over the dead, and the pain of her unrequited love for Baldr, the most beautiful of the Norse gods. We discover her friendship with a frost giant, condemned to oversee the bridge to Hel’s realm, and the despair that leads her to consider a role in Ragnarok: The Twilight of the Gods.

I loved this book. As a fan of Norse myth and YA, I enjoyed seeing the myths from Hel’s perspective: an outcast, literally cast away from her family; forced to make her way on her own. She suffers loneliness, the pain of loving someone unavailable, and the desire for revenge. This is a perfect addition to middle school libraries, and a great way to connect ancient myths to contemporary YA. Hel’s voice is clear and strong; supporting characters also have defined personalities and the dialogue – both Hel’s internal dialogue and the dialogue between characters, particularly between Hel and Loki, is delicious.

Francesca Simon has delved into Greek and Norse myth in the past. While I’m not sure if her books The Sleeping Army and The Lost Gods are part of The Monstrous Child‘s Universe, as they take place on Midgard (Earth), I’m still going to add them to my collection to stand next to Rick Riordan’s Magnus Chase series, because the kids at my library read any and all things fictional myth. The Monstrous Child stands on its own as a solid work of Norse myth and middle school-level fiction. Younger readers will be familiar with Ms. Simon’s Horrid Henry intermediate series.

Originally released in hardcover in May 2016, The Monstrous Child‘s paperback release is due out in a few short weeks. You can grab a copy from your library right now! 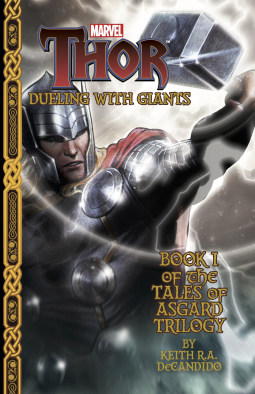 A new series of prose novels gives Asgardian fans more tales of Thor, the Warriors Three… and Loki, the eternal troublemaker. Dueling with Giants pits Thor against the Frost Giants when they seek revenge for a perceived slight against them by Odin. Little do the giants realize that a certain trickster’s been pulling all the strings the entire time… can Thor save the day?
Dueling with Giants is fun reading for any fan of the Marvel adventures of Thor and Co.: there are no other Avengers in this story, but they do get a brief mention. Loki’s here, providing just enough malicious trickery to keep the story moving along, and I was happy to see some hilarious banter between the Warriors Three, especially Fandral’s jabs at the self-titled Lion of Asgard, Volstagg. I was even more excited to see that the next chapter in the trilogy will center on Lady Sif, who really, really needs some more character study, especially since Marvel went and canceled Thor’s origin book, Journey Into Mystery, just as it was developing into a brilliant Lady Sif book.
The language and one or two standalone situations in the book suggest a slightly older audience than middle grade: I think it’s great for middle schoolers and above. Add it to collections where you’ve got comic fans, Marvel fans, and fans of fantasy that may have moved on from Rick Riordan but prefer more myth-based fantasy than current YA hot picks.
If you’re a fantasy fan – especially if you’re in a dedicated fandom – you know Keith R.A. DeCandido’s name. He’s written novels in the Supernatural, Star Trek, Sleepy Hollow, and Heroes universes; to name a few, as well as his original and prolific body of work. His author website provides links and more information about his work. 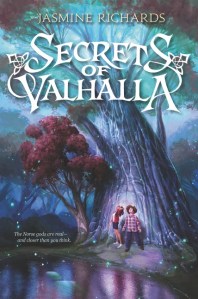 Buzz doesn’t have the easiest home life. His mother disappeared six months ago, his scholarly father is distant and cold, and a kid at school is a jerk who happens to be on the opposing soccer team at school. He meets up with Mary, the new girl at school who happens to be a little… different, and the two discover that Sunna, the Norse goddess of the sun, is taking up residence in a local weatherwoman’s body – just before she’s kidnapped by Loki, the infamous Norse god of mischief. Since Sunna is also the goddess in charge of Sunday, Saturday’s now on a repeating loop, and Buzz and Mary need to go on a quest to find the Runes of Valhalla, which will lead them to the day guardians – seven gods and goddesses who keep time in order – before Loki gets to them. It’s a race against time to save the world!

I know mythology books get a lot of play, and I love it. I can’t get enough of the new takes on these mythic tales, and considering that I still can’t find a library copy of Rick Riordan’s Sword of Summer, not to mention the fact that the Percy Jackson series still flies off my shelves, neither can middle grade readers. Secrets of Valhalla is a fun spin on the Norse myths that incorporate the Greek and Roman pantheon, too. It’s a quest novel, it’s a friendship novel, and it’s a family novel. While kids are waiting for their copy of Magnus Chase to come in, give them this book. Display with K.L. Armstrong’s Blackwell Pages and Kate O’Hearn’s Pegasus series (and she’s got her own Norse book, Valkyrie, coming out in February), have a mythological read-aloud, and ask the kids to choose which day guardian they’d like to be (I’m thinking Sigyn should have been a day guardian, but that’s just me). The ending is tied up nicely, so I’m not sure if we’ll see a sequel, but never say never…

Jasmine Richards’s first novel, The Book of Wonders, is also full of fantasy and magic. Her author webpage has a bio and contact info, plus reviews on her first book. 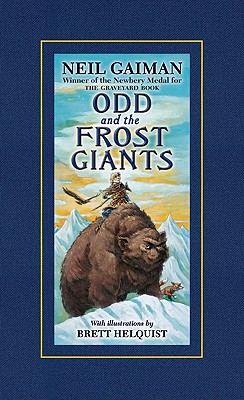 Neil Gaiman takes on Norse mythology with his tale of a lame young Norse boy named Odd, who encounters a bear, a fox, and an eagle in the frozen woods one day, only to discover that they are Thor, Loki, and Odin, on the run after Asgard is overrun by Frost Giants. They need Odd’s help to regain the kingdom and end the forever winter that the Frost Giants have spread throughout Midgard (and possibly, all of the realms). Is Odd smart enough to outwit the Frost Giants?

Gaiman adapts his storytelling voice for this story (as opposed to his dark fantasy voice that you can read in works like Coraline and Graveyard Book). The book is filled with his wry humor, especially in the interactions between Thor, Loki, and Odin – he gives Loki a particularly amusing voice, being the God of Mischief in the guise of a wily fox. Gaiman also excels at writing quiet, mild characters that achieve greatness through intelligence – Odd is yet another quiet Gaiman hero. Quiet kids will love how Odd uses his wits to save the day, rather than charging around Asgard swinging a war hammer and screaming for blood.

Brett Helquist’s art enhances Gaiman’s story with beautiful black and white sketches. The artwork lends a real authenticity to the Norse tale; the work could hail from a hoary, old tome, found in an old castle, it has such a wise old sense of timeliness about it. 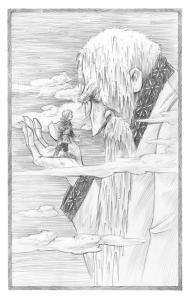 I love Gaiman’s storytelling, and Odd is right there with his other work. This could enhance a unit on storytelling as easily as it could a unit on Norse mythology, and there are many activities to get kids writing that this book could inspire, including a Write Your Own Myth workshop, or asking the kids to put themselves in Odd’s place – how would they save Asgard? What would they do if they discovered three gods in the woods? Do you identify with Odd? What makes a hero heroic? There are many discussion topics that work for this book.