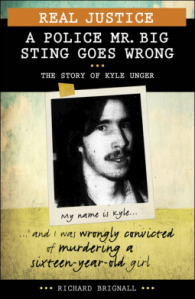 I’ve got some teens at a few of my libraries whose reading levels aren’t always at age level, but giving these kids a younger level book isn’t always the answer. That’s what the term Hi-Lo is all about: high interest, low reading level. Reaching teens by writing deeper texts with complex themes and ideas, using succinct language and shorter sentences is the heart of Hi-Lo. There are some good hi-lo books out there – Saddleback has a good line of short chapter books available, as does Canadian-based Lorimer (distributed in the U.S. through Orca), whose chapter books are longer in length and seem to handle slightly more complex sentence structures and even deeper content.

Real Justice is a true crime series, with A Police Mr. Big Sting Goes Wrong detailing the true crime story surrounding the murder of 16 year-old Brigitte Grenier at a music festival in Manitoba, Canada. Unger, who was 19 at the time of the murder, was charged with her murder despite Grenier’s involvement with another concertgoer that evening. An entrapment sting operation led to his arrest and conviction for a murder he swore he did not commit until his acquittal thanks to DNA evidence 20 years later.

Brignall states his facts as objectively as possible and pulls no punches – the book gets somewhat graphic here – and offers an in-depth study of the case that true crime and nonfiction fans will appreciate. Further resources in the back offer a timeline and more reading for those interested.