Here’s another great gift idea / end of year budget purchase for your collections. Do you have Percy Jackson/Magnus Chase/mythology fans in your circle, whether in work or life? Know a teen who devoured Neil Gaiman’s Norse Mythology, or a tween who loves Gaiman’s Odd and the Frost Giants? This is the book to have on hand when they ask what to read next. Across the Rainbow Bridge is a companion to 2017’s Norse Myths: Tales of Odin, Thor, and Loki, and includes five more stories from a master storyteller and artist. Loki matches wits with a troll in “The Troll and the Trickster”;  a miserly ghost isn’t ready to let go of his money just yet in Skarp’s Ghost; a girl named Inga catches the goddess Frigg’s attention in “Blue of Blue”; Odin goes wandering yet again in “Your Life or My Life”, and “The Gift of Poetry” is bestowed on a young boy… but nothing comes without strings attached. Jeffrey Alan Love’s moody, stark two-color illustrations make brilliant use of shadows and contrast, adding to the mythic storytelling. A must for your mythology collections.

Across the Rainbow Bridge: Stories of Norse Gods and Humans has starred reviews from Booklist, School Library Connection, Kirkus, and The Horn Book. 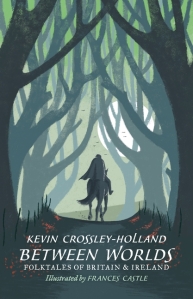 Forty-eight folk and fairy tales from Britain and Ireland; some you’ve heard before, most will be new to you. The tales are organized by Magic and Wonder; Adventures and Legends; Power, Passion, and Love; Wits, Tricks, and Laughter; and Ghosts. This is a wonderful tome for your fantasy and fairy/folk tale collections; especially, if, like me, you love having a collection of tales from all over the world. Some are short enough to read aloud, others are longer and invite readers to sit down, have a nice cup of hot chocolate, and imagine a storyteller leading you back through time for  stories about fairy rings, boggarts, and changelings. Frances Castle’s stark black-and-white illustrations set a mood for each story and each section. An afterword on “Why Everyone Needs to Be Able to Tell a Story” is told as a final folktale, infusing the entire volume with a bit of magic. Comprehensive source notes identify each story’s source(s) and original titles, if any.

A definite add to your folk and fairy tale shelves, and a gorgeous gift for readers. Keep a copy at your Reference desk, too, if you have it in the budget.