A glimpse into the lives of three exchange students living in Japan, Himawari House is about the friendships, frustrations, and adjustments that come with living in a new country: in this case, Japan. Nao, Hyejung, and Tina all move into Himawari House and attend the same Japanese school, but have different reasons for being there. Nao wants to reconnect to her Japanese heritage and worries about fitting in with Japanese culture. “Too Japanese” for her American life and “Too American” to Japanese classmates, she struggles with cultural identity. Hyejung, is Korean and moved to Japan to escape her overbearing parents and their unrelenting focus on her academic success. Tina is from Singapore and struggles with connection, preferring to lose herself in fandom. Although Nao’s story is the main driver, Hyejung and Tina have fully realized, moving backstories, all explored here, along with their roommates, two Japanese brothers with widely differing personalities. The group all come together and live here at Himawari House, and the story is a slice of life look into a year in their lives, as they all live and work side-by-side, eat, fall in and out of love, go to school, and talk late into the night. The language barriers are expertly illustrated here – largely bilingual, Japanese characters appear in many word bubbles; the dialogue has a blend of English, Japanese, Korean, and Singlish (the English Creole spoken in Singapore), with a brilliant explanation of the use of accents in the story at the end. Black and white artwork is largely realistic, with Chibi renderings to communicate extreme emotion. It’s a well-done character study and will be popular with teens and young adults. 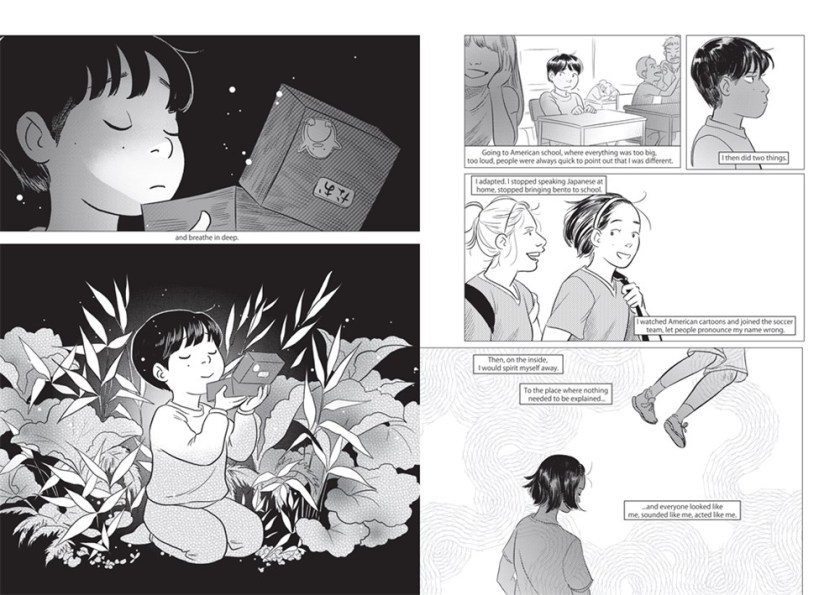 Niki Nakayama, the master chef behind the California restaurant n/Naka, shares her story in this lovely picture book biography from children’s book authors Jamie Michalak, Debbi Michiko Florence, and illustrator Yuko Jones. Beginning with Ms. Nakayama’s childhood in California, the story gives us 13 “bites”: 13 defining moments in the chef’s life, to parallel her 13 course menus at n/naka. The Japanese-American chef developed a love of global cuisine as a child; her mother blended Japanese and American foods and flavors together to make meals like meatloaf with soy sauce, or teriyaki turkey for Thanksgiving dinner. Ms. Nakayama began creating her own recipes as a child, eventually traveling the world to sample cuisines from different cultures. When she returned to the United States, she apprenticed as a sushi chef, ultimately opening her own restaurant, n/naka, where she now creates 13-course tasting “storytelling” menus. Back matter includes a timeline of Niki Nakayama’s life, an explanation of terms used in the story, and the chef’s own childhood wonton pizza recipe. The story flows from moment to moment in the chef’s life, touching on frustrations like having her family dote on her brother, and having her family agree to finance her first restaurant, but agree to give up her dream if it was not successful. Spreads show Nakayama and her family gathering at their own table, and families gathering to eat at n/naka, illustrating the power of community that eating together brings. Spreads show colorful foods from all over the world sprawl across pages, and diners speaking different languages as they enjoy a creative master chef’s food.

You can visit n/naka’s website and see Chef Nakayama’s profile; you can see a promo for her Chef’s Table episode on Netflix below.

Inspired by a true story, Write to Me tells the story of Clara Breed, a children’s librarian who corresponded with her Japanese American patrons when they were sent to internment camps during World War II. She gave them postcards to let her know where they were; she visited them, wrote to them, and sent them books and crafts to help ease their minds during their confinement. She advocated for those children by writing articles and attending rallies, advocating for her kids. When the kids came home, she was waiting for them – and they came to her. She was comfort in a cruel time. Write to me tells the story of Clara Breed through conversations with her library kids; muted pencil art illustrates life in the prison camps, with excerpts from actual letters on each page to show the passage of time. Endpapers display photos from the period, including family arrivals at the camps and evacuation notices for Japanese Americans. An author’s note features a photo of Clara Breed and two of her patrons, taken at a reunion in 1991. There’s a timeline of Clara Breed’s life, including links to her articles on the war, relocation, civil liberties, and human rights, and a selected history of the Japanese People in the United States. Source notes, bibliography, and further reading are available. A touching book about a woman who touched lives, and a nice addition to biography collections.