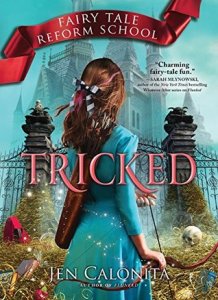 Gilly and friends return in Tricked, the third installment of Fairy Tale Reform School, but things are very, very different now. Gilly’s in school to be a cobbler, like her dad, but she really isn’t into it. Her sister, Anna, is falling in with a bad crowd: Hansel and Gretel are jerks, causing trouble all over town. They go too far with one prank that lands the three of them in – you guessed it – Fairy Tale Reform School, but the school has been through some big changes: Flora, Cinderella’s formerly wicked stepmother, is no longer headmistress; instead, the master dealmaker, Rumpelstiltskin, is in charge now, and the classes seem to encourage the kids to be more villain than hero. Gilly, Jax, and Maxine need to get back on the inside to find out what’s going on in those hallowed halls, get to the bottom of Rump’s treachery, and save Anna while Gilly’s at it: if Anna even wants to be saved.

I’ve been a Fairy Tale Reform School fan from the beginning, and Tricked is every bit as good as the first two. I love the way Jen also manages to address some of the very real things going on in the news today through FTRS, with a trickster who excels in the art of the deal (ahem) pulling the strings and making everyone in that school either blindly follow him or disappear. When things came together for me as I read, I realized how brilliant Tricked is in every respect, and I admire Jen Calonita for taking such a timely message on and communicating it to the kids who need to understand that when something doesn’t seem normal, it really isn’t.

There are strong subplots, addressing the frustration of being in a sibling’s shadow, making your own dreams happen versus living up to others’ expectations.

Last year, Jen Calonita introduced us to Fairy Tale Reform School with her first book, Flunked. This year, Gilly and her friends are back for more with Charmed! Read on for an excerpt and your chance to win an advanced reader copy of your own! 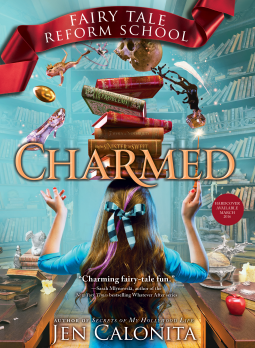 Charmed is the exciting sequel to the wildly popular Flunked — second in the brand new Fairy Tale Reform School series where the teachers are (former) villains.

It takes a (mostly) reformed thief to catch a spy. Which is why Gilly Cobbler, Enchantasia’s most notorious pickpocket, volunteers to stay locked up at Fairy Tale Reform School…indefinitely. Gilly and her friends may have defeated the Evil Queen and become reluctant heroes, but the battle for Enchantasia has just begun.

Alva, aka The Wicked One who cursed Sleeping Beauty, has declared war on the Princesses, and she wants the students of Fairy Tale Reform School to join her.  As her criminal classmates give in to temptation, Gilly goes undercover as a Royal Lady in Waiting (don’t laugh) to unmask a spy…before the mole can hand Alva the keys to the kingdom.

Her parents think Gilly the Hero is completely reformed, but sometimes you have to get your hands dirty. Sometimes it’s good to be bad…

Jen Calonita has published more than a dozen novels, has seen her works translated into nine languages, and is the recipient of the Louisiana Young Readers Award. When Jen isn’t plotting, she lives in New York with her husband, two sons, and their feisty Chihuahua, Captain Jack Sparrow. Visit Jen at jencalonitaonline.com.

Wands begin popping up in kids’ hands as we walk through the halls, and we all cheer. Pop! My wand arrives in my hand—long, dark-gray, and nicked like it’s seen a few battles. Hmm…what to try first… I’m just about to test the wand out, when I feel the hair on the back of my neck stand up. Instinct tells me to dive out of the way. When I look up, I see a classmate spelling the troll next to her. The girl turns into an ice sculpture. Geez, that was close. I better stay alert.

Pop! Pop! Pop! Kids begin casting all around me. The crowded hallway is suddenly full of talking woodland creatures, toads, fireworks, and a pretty impressive cloud raining licorice. Kids are cheering and fighting, and the sound of all those wands working is enough to give me a headache. I hurry away from the spell zapping, looking for somewhere to practice alone.

The chaotic hallway disappears behind me, and a new empty hall arrives in its place. I happen to know this hall leads to the school courtyard so I hurry down it and head outside. Ahhh…this is more like it. The warm sun is shining bright high above the castle walls, making me wistful for adventure. I can never sit still for long.

“Pardon the interruption! We hope you are enjoying your wand experience, but remember, all wands disappear at the hour mark so choose your magic wisely,” Miri says. I’m relieved to find no mirror in the courtyard, which means she can’t see what I’m up to. That magic mirror is forever tattling on students for bad behavior. “As a reminder, flying is not advised.”

“Not advised, but she didn’t say it was against the rules,” I say to myself. I flick the wand over my stuffy, uncomfortable pale-blue uniform and turn it into a comfy peasant shirt and pants. I swap out my ugly school shoes for my beloved lace-up boots. Now that I’m comfortable, I get to the task at hand. I’m sure an actual spell would work better, but since I don’t know one, I just imagine myself flying, and Bam! I’m slowly floating up, up, up in the air. Score!

A Pegasus flies by me pulling a coach with four students in it.

When you save your school from a wicked fairy, people tend to remember your name. Even if you don’t remember theirs.

“Hi!” I say, lying back like I’m floating on a cloud. Wow, this is relaxing. I stretch my arms wide and—oops!

My wand falls from my grasp. Uh-oh. I begin to plummet, spinning faster and faster with no sign of stopping. Before I can even think of a way to break my fall, whoosh! I feel my body hit a blanket and bounce up, then land again on a magic carpet.

“Ten minutes into Wand What You Want, and you’re already having a near-death experience?” my friend Jax asks. His curly blond hair looks white in the bright sunlight. He casually 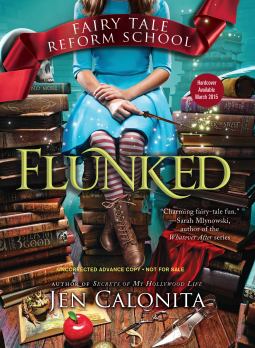 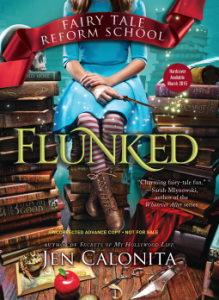 Gilly isn’t bad, really. She’s just a little light-fingered. But she’s doing it for her family – her father’s a shoemaker, and she’s got a LOT of brothers and sisters. (Sounding like a familiar tale yet?) Unfortunately for Gilly, she gets caught one too many times, and ends up at Fairy Tale Reform school, where Cinderella’s stepmother is the headmistress and faculty include the Evil Queen (Snow White’s stepmother) and the Big Bad Wolf. Gilly makes two friends, Kayla and Jax, who give her the inside scoop on FTRS; just as Gilly’s gut told her, there’s more going on than meets the eye. There’s one villain on the loose, and she’s bringing the fight to the school. Are the teachers really reformed, or is there someone on the inside helping the wrong side?

I’m a big fan of this flipped fairy tale trend happening in juvenile and YA fiction. It’s a great way of keeping a little spark of childhood wonder with us, and there really are some great stories to build on. Flunked – which reads, at points, like Scared Straight for fairy tales – is an interesting entry into this genre. We’ve got the big guns: Cinderella, Snow White, and their antagonists here, and we have one of the children of the old woman who lives in a shoe. We’re firmly rooted in the mythology, so we can slip right into the tale.

Gilly is a likable character; she’s the thief with a heart of gold, the maligned daughter who just wants to help her family. She’s the most developed character, but there are reasons for that which become clear as the book progresses. There were some good plot reveals and characters that you never quite trust – it’s a good suspense, where the reader is left to guess where loyalties truly lie. I’m interested in seeing where future stories take us, now that we’ve got an established storyline, characters, and plot.

Jen Calonita is a popular tween/YA author. Her Secrets of My Hollywood Life series is hugely popular at my library, and I’m super-excited, because I just found out that she will be speaking to my son’s middle school, Russell Sage JHS in Queens, on March 13th!

While you’re waiting for your copy of Flunked, check out the book’s website, and find your FTRS mentor. Professor Wolfington is mine, which makes me pretty happy. The book’s Facebook page offers fun shots of the “police blotter”- news clips that appear, along with newspaper articles about incidents taking place within the school and the village, in Flunked. This could lead to a fun program at a library or in class – create your own newspaper article with a modern-day spin on a fairy tale! There’s a great activity kit with some ideas that I may use in my own library for Summer Reading.