My favorite dino is back! My favorite dino is back! Dexter T. Rexter and his best friend Jack are back and they’re going on vacation in Lindsay Ward’s newest Dex-venture (see what I did there?), Vacation for Dexter! They’re going to exotic FLOR-I-DA, and Dexter is just thrilled! He’s totally vacation ready, rocking his supercool sunglasses, nifty hat, and his guidebook with all the local hot spots, but there’s one tiny problem: Dexter really, really, really, REALLY doesn’t want to get on a plane. Dinosaurs don’t fly, and he’s got a bunch of reasons why! Dexter and Jack are both going to need readers to encourage them and cheer them on through this flight, because they’re both pretty nervous!

Dexter is just great. He’s such a perfect fit for preschoolers experiencing new things, whether it’s misplacing a grown-up (Don’t Forget Dexter!), worrying about show and tell or speaking in front of a group (It’s Show and Tell, Dexter!) or facing fears head-on (Vacation for Dexter!) He’s nervous, but he admits it, and lets kids know that it’s okay, even normal, to be scared of new things, but it’s also okay to be brave and face those fears. He uses humor, empathy, and the right amount of hugs to get his message across, and there’s always a new song (we’ve got two new ones in this book!) to sing at the end. Lindsay Ward is just so good at storytelling; she gets preschoolers. The printmaking ink, pencil, and cut paper artwork is the same upbeat, bright art we’ve come to know and love: Dexter is bright orange, with red and pink splotches on his spines and body; his body and claws are lined like a piece of notebook paper, and he’s friendly, with a big, toothy smile and big, expressive eyes. Jack, Dexter’s buddy, is a child of color, with dark skin and curly, black hair. Parts of each spread look like a coloring book, colored in, adding to the kid-friendly feel.

Pack Vacation for Dexter, some cookies, and your own kiddo’s best friend for your next trip. And make sure to print a few copies of this picture of Dexter to color in! 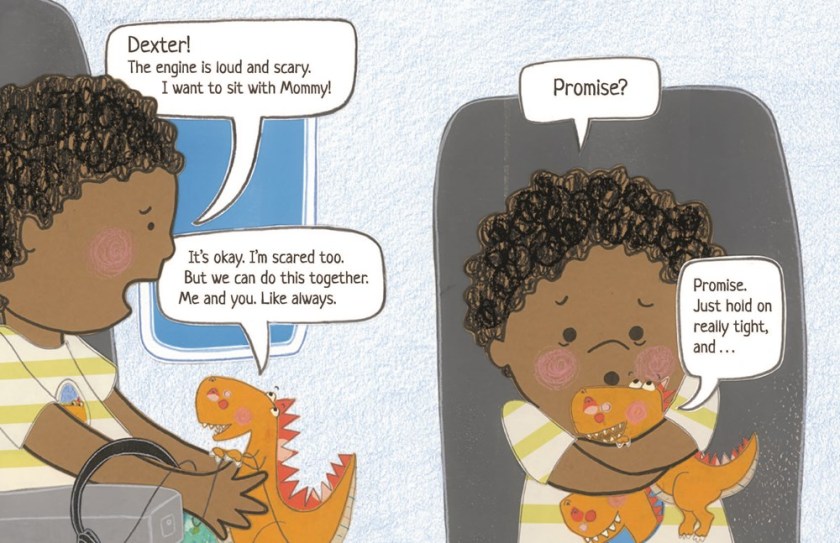 Win your own FULL SET of Dexter books, including Vacation for Dexter! Enter this Rafflecopter giveaway! (U.S. addresses only, please!)

Lindsay Ward is the creator of the Dexter T. Rexter series. Although she isn’t afraid of flying, she always looks forward to cookies during her flights. She is also the author and illustrator of Brobarians, Henry Finds His Word, and When Blue Met Egg. Her book Please Bring Balloons was also made into a play.

Most days you can find Lindsay with her family, writing and sketching at her home in Peninsula, Ohio. Learn more about her online at www.LindsayMWard.com or on Twitter: @lindsaymward.

Praise for Vacation for Dexter!

“The illustrations are just as laugh-out-loud funny as ever, with the toy’s expressions stealing every scene…Jack and Dexter have become a beloved duo, and the dino’s behavior-modeling sure goes down easily.” —Kirkus Reviews

Readers!!! Kiddos!!! I have made no secret that I am probably Dexter T. Rexter’s biggest fan (except maybe for my own kid), so I am SO EXCITED to have gotten a sneak peek at the cover for Dexter’s newest adventure! Wanna see? You ready?

First, you have to sing the Dexter T. Rexter song. No, I’m not kidding. Come on:

STOMP THROUGH THE SWAMP!

Okay, now we’re ready. I present to you… 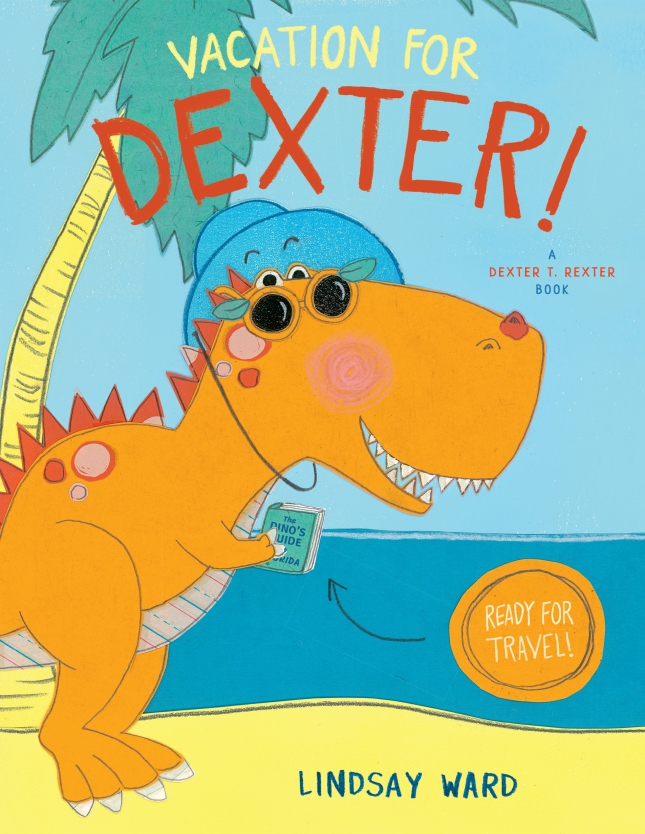 Dexter T. Rexter is on a plane-for the very first time.

Dexter can’t wait to go on vacation with his best friend, Jack. Supercool orange sunglasses? Check. Nifty travel hat? Check. Plane tickets? Uh, what? Dexter may be the toughest, coolest dinosaur around, but everyone knows T. Rexes don’t fly! If anyone could do it, he could. It’s just that he’s suddenly feeling a little hot. And maybe a little nervous. But just as he starts to melt down, he notices Jack looks upset. Dexter realizes he has to be brave enough for both of them. And maybe, just maybe, he’ll start to have a bit of fun in the air.

Both nervous and funny, Dexter tells the readers what he’s feeling and even asks their advice as he comes to understand that being brave with a friend makes everything a little better. And hey, those cookies during the flight don’t hurt, either!

Lindsay Ward is the creator of the Dexter T. Rexter series. Although she isn’t afraid of flying, she always looks forward to cookies during her flights. She is also the author and illustrator of Brobarians, Henry Finds His Word, and When Blue Met Egg. Her book Please Bring Balloons was also made into a play. >>> Most days you can find Lindsay with her family, writing and sketching at her home in Peninsula, Ohio. Learn more about her online at www.LindsayMWard.com.

He’s back! My favorite neurotic toy dinosaur is back in his second adventure!!

Dexter’s fully recovered from his experience in the pediatrician’s waiting room, and he and Jack are back together to take on a new adventure: SHOW AND TELL. But Dexter’s worried again… he wants to wow the class! Should he wear a costume? Learn an exciting new routine? OH NO! WHAT IF HE’S THE… BORING TOY? Dexter’s latest story takes on performance anxiety and worries about self-image. Thankfully, the omniscient reader is there to let Dexter know that being himself is the best way to go: and sure enough, the Dexter Dino chant makes him the most popular dino in the class and on the bus!

I have such love for this fun series and for author Lindsay Ward. Dexter is adorable, neurotic, and totally relatable. He worries about being cool enough to hang with his buddy, Jack; he worries about not being exciting enough to hold a kids’ attention, and he works through his anxiety for everyone to see, letting kids (ahem… and some adults) know that we’re not alone. By pointing out physical manifestations of what nerves can do to us: pit in the stomach, fidgety claws, awkward smiles, and all, Dexter lets readers know that we all get anxious about something, and that it’s okay. Being oneself is the best solution.

Dexter’s bright color and body postures make him awkward and lovable, and his empowering Dexter Dino chant gets an entire room up and stomping, making this PERFECT for storytimes. I tested this one out with a pre-k Kindergarten visit (they’d had a test run with Don’t Forget Dexter!), and they all jumped up and joined me for some chomping and stomping. I had a couple of kids let Dexter know it was okay, too: leave room for kid reactions when reading it out loud and watch empathy in action. My own 6-year-old was so excited to get the book in the mail, he had his own stomping party! Have a show and tell storytime, and encourage kids to talk about their cool things. Have some toys on hand for anyone who shows up empty-handed, and encourage some imagination by asking kids about what they like most about their toys and objects. Maybe you’ll get a new rhyme or two out of the experience, and don’t forget to have Dexter coloring sheets on hand!

Lindsay Ward is the author of the Dexter T. Rexter book Don’t Forget Dexter! Though she never got to bring an orange dinosaur to Show and Tell Day, she did once take all four albums of her sticker collection. She is also the author and illustrator of Brobarians, Henry Finds His Word, and When Blue Met Egg. Her book Please Bring Balloons was also made into a play.  Most days you can find Lindsay with her family, writing and sketching at her home in Peninsula, Ohio. Learn more about her at www.LindsayMWard.com or on Twitter: @lindsaymward.

“Ward’s gentle art features cut-paper forms with residual pencil outlines, providing an ad hoc quality to the spreads. Readers prone to anxiety over big events should be tickled by the idea that a toy has concerns too.” —Publishers Weekly