Hi all! I’m getting caught up on the avalanche of books in my home, so bear with me if I’m a little behind on my Back to School posting. NYC public school kids are back to school today – GOOD LUCK, EVERYONE! – and I’ve been getting my kiddos ready to start their school years off right. (So. Many. Supplies.) Anyway, with that, let’s talk starting Kindergarten with Lisa Robinson and Eda Kaban!

Yeeeargh! It’s the first day of Kindergarten, but Pirate Emma has decided that she’s not leaving her preschool Captain, Cap’n Chu, and her crew! Cap’n Chu brings her over to the Kindergarten classroom – a spaceship! – but Pirate Emma isn’t having it. She runs back to Cap’n Chu’s room and refuses to leave, even going so far as to start a mutiny, and threatening Cap’n Chu with walking the plank! Thankfully, the Cap’n is a good and understanding Cap’n, who’s likely been through this before. She consoles Emma and convinces her that, while it’s time to join her new crew, she can always visit the pirate waters of preschool. From there, Emma’s ready: she joins the Kindergarten class as Space Pirate Emma.

Having been one of those moms, reading Pirates Don’t Go to Kindergarten was a relief: authors and illustrators who get it! They’re speaking to my now-second grader, who used to wake up morning after morning with one ailment or other that would render him unable to go to Kindergarten (and he, too, had a VERY understanding teacher, thank goodness). They’re speaking to me, letting me know that this is okay. I’m not the first parent, nor will I be the last, who will have a pirate that defies Kindergarten, or first grade, or maybe things on a smaller level, like going to the bathroom in school, or eating school lunch. This is all part of growing up, and growing up can be scary and hard. Having books like this can make it easier on all of us: kids, parents, caregivers, and educators alike.

The digital illustrations are colorful and lend themselves to exciting classrooms, where teachers create atmospheres for their students: Cap’n Chu created a pirate setting for her Pre-K class; Ms. Hayes has a spaceship-themed classroom for her Kindergarteners. (Psst… these teachers exist, I know a bunch of them!) The illustrations are enticing, giving kids (and worried caregivers) a glimpse into how fun a classroom can be. There are also tons of craft project ideas here: pirate hats and paper swords, anyone? Space helmets and stars?

Second grader Ellie May loves learning about the US Presidents and is desperate to show her patriotism during Presidents’ Week at school. She just has to be flag leader during the Pledge of Allegiance during this week! She is on a mission to be presidential and to make sure her teacher, Ms. Silva, knows it; this way, she’ll be sure to get picked. But Ellie can’t seem to catch a break, whether she’s chopping the class plant (a cactus!) while trying to relive George Washington and the cherry tree, or taking apart the pencil sharpener and making a big mess, while attempting to tinker like Abraham Lincoln. Don’t even ask about how she tried to make her little sister, Midge, a flag, so she could teach her the Pledge at home. Ellie’s got a good heart and means well – she just has to learn to let that shine through, and most importantly, to be patient.

This is a brand new chapter book series that celebrates popular classroom holidays, and stars a dynamic, funny child of color named Ellie May. Second graders will love her, and they’re sure to see themselves reflected in her and her quest to be noticed. Patience? Who needs patience, when you’re eager? Ellie discovers she has a lot to learn as each of her attempts to show off for her teacher end in near catastrophe, but she’s surrounded by supportive friends, family, and teachers who are there to slow Ellie down and put her on the right path. Written in the first person from Ellie’s point of view, and illustrated with black and white sketches throughout, kids will enjoy this one – and it’s a great series to feature in classrooms and libraries. back matter includes the history of the Pledge of Allegiance, and of the Presidents’ Day holiday. 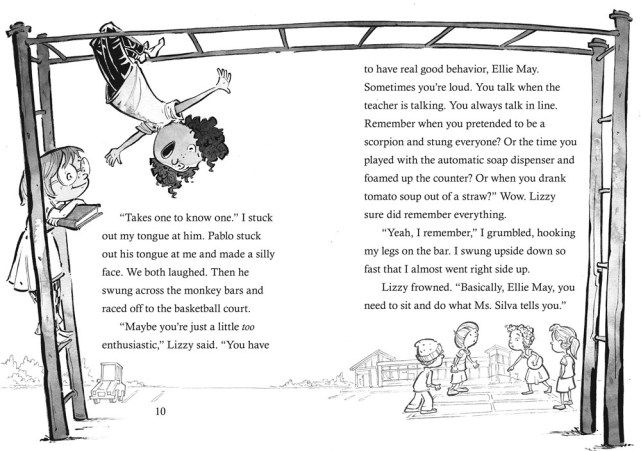 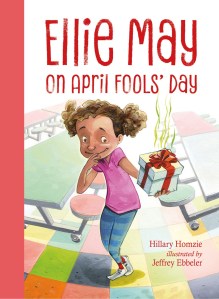 Ellie May is back, and is ready for April Fools’ Day! Her class is allowed to celebrate, as long as the pranks are made in good fun. Ellie decides she’s going to prank her friend, Ava, whose birthday celebration is taking place on the same day! After a few attempts at pranks fall flat at home and at school, she’s ready for the big day: but this is Ellie May, after all, and her attempt at a silly goof goes awry when she gets carried away in the classroom. After sitting it out and thinking it over, Ellie May starts understanding the true meaning of a good-natured prank, apologizes to her friend, Mo, and to Ava, and celebrates April Fool’s Day with her whole class as her teacher takes them outside for a rare bird sighting!

This second Ellie May story is every bit as fun as the first one. Ellie is trying so hard to make a name for herself that she gets a little carried away, but it’s never mean-spirited, and she’s always got someone there to point her in the right direction. Kids will see themselves and their classmates in this one, and the story lends itself to a good discussion about how getting carried away can lead to hurt feelings or hurt body parts. The teacher’s April Fools’ Day activity is a fun one – I may have to try that one in the library. Back matter includes an explanation on April Fools’ Day’s history and traditions. Black and white illustrations throughout add to the fun and promote reader interest.

This series is going on my to-buy list. Chapter books do really well here at my library, and books about classroom holidays – holidays, in general, for my growing readers – are always in high demand. I’ll have to mention this series to a few visiting teachers, too!