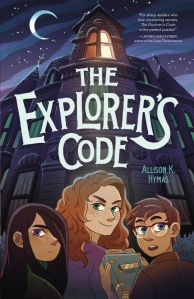 Idlewood Manor was a home with a storied history, but has been empty for decades, until recently. The current owner has opened the doors, and a group of guests is coming to stay for a weekend; among them, Charlie, a math whiz who won the trip for his family, and his sister, Anna, who is far less scholastic in her pursuits, but that’s because she’s got the entire world to explore, just like her idol, explorer Virginia Maines. Also visiting with her family is Emily, whose historian parents have their own reasons for wanting to visit Idlewood. The three kids separately discover mysterious clues to Idlewood’s history, and the history of those who lived there; they also notice that other guests seem to have a major interest in unlocking the Manor’s secrets. It’s a race to solve Idlewood’s mysteries, but can the three kids work together to solve them in time? Loaded with actual puzzles, ciphers, and riddles, The Explorer’s Code is full of mystery and scandal,with very likable, realistic characters at its core. A note about ciphers at the end invites readers to test their own coding mettle. The relationships are spot-on, with the ups and downs experienced by Anna and Charlie, who were close when they were younger, but have drifted apart in recent years, and Emily, desperate to make her parents proud of her. Anna and Emily rush into things for different reasons: Anna, because she’s caught up in the spirit of curiosity and adventure; Emily, because she feels like she’s racing against the clock. Charlie is slow and deliberate, thinking things through, which clashes with his sister’s impulsive wandering. Together, these qualities make them stronger – something they have to work on over the course of the story. Perfect for readers who enjoyed Ben Guterson’s Winterhouse, Jennifer Chambliss Bertman’s Book Scavenger series, and of course, Chris Grabenstein’s Mr. Lemoncello’s Library series. 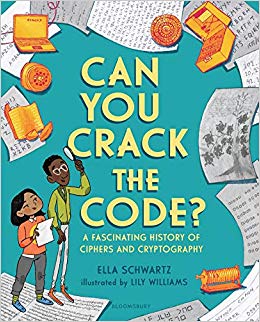 Three years ago, I held a great, week-long Spy program at my library for Summer Reading. The kids went berserk for it; I had a blast planning and running it, and books like Can You Crack the Code? make me think it might be time to hold a program like that again. Ella Schwartz has come up with a nice history of codes, code names, and cryptography for middle graders, with loads of pictures, informative sidebars, and activities to keep readers on their toes. Famous moments in cryptography history include the Caesar Cipher, invented by Julius Caesar, the Arnold Cipher, used by the infamous Benedict Arnold, and the Enigma machine, used by the Germans during World War II; the machine that gave them the upper hand until a team of British codebreakers at Bletchley Park finally broke the code (shout-out to computer scientist and codebreaker Alan Turing). Want to know why you have to generate a strong password, obnoxious as it may be? Check out the “Can You Hack the Bank?” activity and you’ll be changing all of your passwords. A final challenge has readers going through the book to solve one last cipher. There’s a comprehensive bibliography and the book is indexed, making this a nice volume to have on your shelves.

Display this with the Book Scavenger series, the Mr. Lemoncello’s Library books, the Secret Coders graphic novels, and – naturally! – the Girls Who Code books, both fiction and nonfiction. Brightly has a good post on fiction with puzzles and codes.

Now, if you’ll excuse me, it’s time to revisit some of my old Summer Reading plans… I know this year’s theme is A Universe of Stories; maybe I’ll just use some codes to send them into space! Great escape room ideas in here, too. All around fun for your brain-teaser-loving readers.