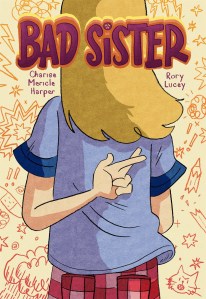 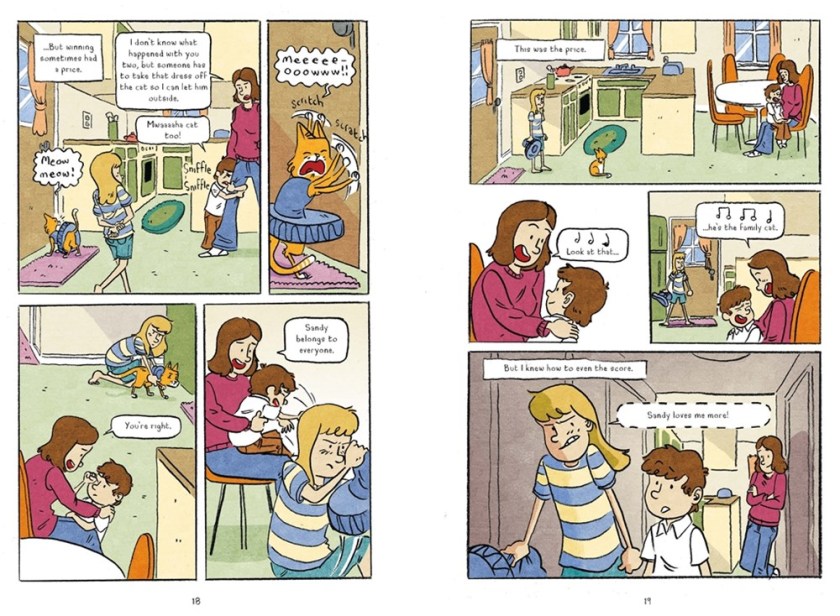 First Second consistently puts out great graphic novels for readers, no matter what age. Fiction or non-fiction, kids, teen, or adult, if it’s coming from First Second, I read it, love it, and get it on my shelves. This spring, there’s something for everyone, with some amazing ladies taking the reins and heading up their own books – plus, a nonfiction collection profiling women who broke the rules and beat the daylights out of the mold-maker, while they were at it.

First up is Brazen: Rebel Ladies Who Rocked the World; profiles of 29 outstanding women from across time, across the world. We know many of their names, but did you know their accomplishments? Did you know that Margaret Hamilton, who defined Wicked Witch with her portrayal of the Wicked Witch of the West in The Wizard of Oz, embraced her terrifying alter ego  – and used her as a bargaining chip for higher pay in Hollywood? How about Temple Grandin, whose research on farm animals led to major changes in the factory farming industry and a push toward animal well-being? Not bad, for someone whose father wanted her institutionalized when she was diagnosed with autism as a child.

I could gush on and on about Brazen. It’s a must-add to your collections; display and booktalk right next to Sam Maggs’ Wonder Women, Jason Porath’s Rejected Princesses, and National Geographic’s Book of Heroines. Bagieu creates perfect, bite-sized biographies of these phenomenal women, making readers want to know more. A list of 30 more rebel ladies who rocked the world whets appetites at the end of the book, and we even get a little bio on our author/artist, Pénélope Bagieu. I’ve enjoyed her previous graphic novels, Exquisite Corpse (for grown-ups) and California Dreamin’, the story of musician Mama Cass. Don’t pass up putting Brazen in your teen space. 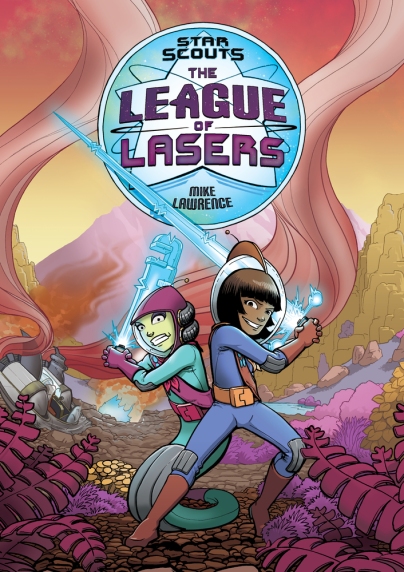 The much-anticipated sequel to 2017’s Star Scouts is here! Avani Patel is rocking the Star Scouts, so much that she’s been invited to join a secret society of elite scouts: The League of Lasers. Sounds awesome, right? But there’s a catch: she has to survive her initiation challenge. While on her way to the planet where she’s supposed to undergo her challenge, her ship throws her off course and crash lands onto a strange planet. With a methane atmosphere. And she’s stranded with Pam, her nemesis. Together, the two Scouts have to figure out how to survive – and to do that, they need to put their differences past them.

I love this series for so many reasons: there’s a child of color leading the pack; there are messages about resilience and teamwork; and most importantly, it’s just so much fun! Mike Lawrence’s dialogue between characters is never slow and never dull, and always believable. He tackles middle grade situations like disagreements and jealousy between friends, but always makes sure to bring things to a resolution through talking and mutual understanding. The humor is smart and the artwork is engaging. Give this to all your Zita the Spacegirl fans and tell them to make space in their hearts for the Star Scouts. 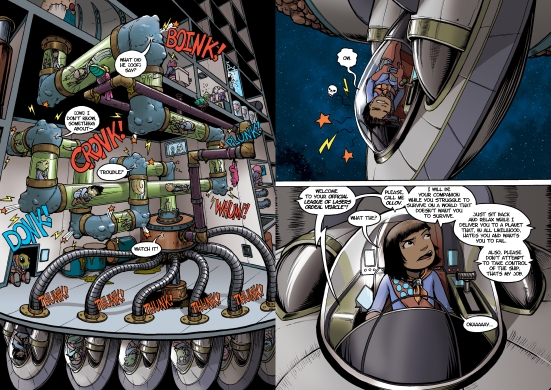 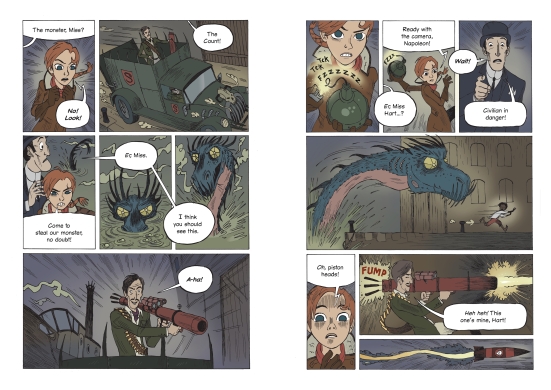 YA author Marcus Sedgwick (Saint Death, Ghosts of Heaven) writes for middle grade with the start of a new series about a teenage monster hunter following in her parents’ footsteps. Scarlett Hart is the orphaned daughter of legendary monster hunters, determined to carry on the family business. The only thing is, she according to the Royal Academy for the Pursuit and Eradication of Zoological Eccentricities (just call it The Academy), Scarlett’s underage, and hunting monsters is against the law. Luckily, Scarlett’s manservant, Napoleon, is there to help, driving Scarlett around London and acting as the face for her kills so they can get paid on hang onto their family estate. The sticky wicket is Count Stankovic, her parents’ – and now Scarlett’s – archrival, who always manages to show up and take credit for her work while threatening to rat her out to the Academy. Naturally, the monster situation gets out of control, and Scarlett roars into action, danger and the law be darned! 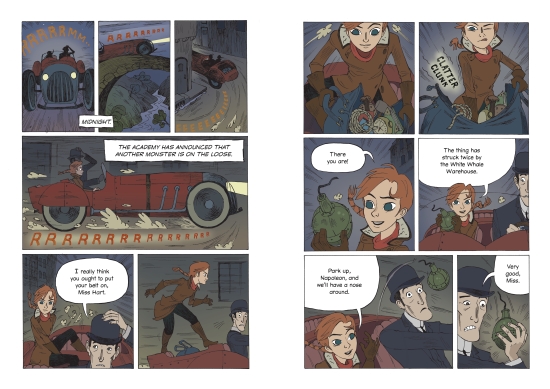 Scarlett Hart is a fun monster-catching adventure romp, with a dieselpunk feel and a spunky young heroine. Thomas Taylor is the original illustrator of Harry Potter and the Philosopher’s Stone, and knows fantasy art. There’s humor, adventure, and fun to be had; a nice start to a new graphic novel series. Give these to your Delilah Dirk readers, and consider re-introducing readers to Shannon, Dean, and Nathan Hale’s Rapunzel’s Revenge and Calamity Jack. 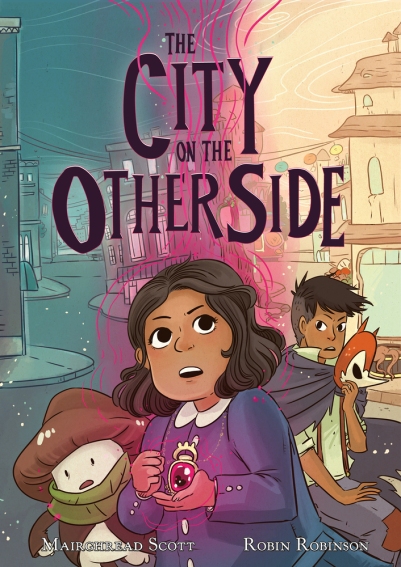 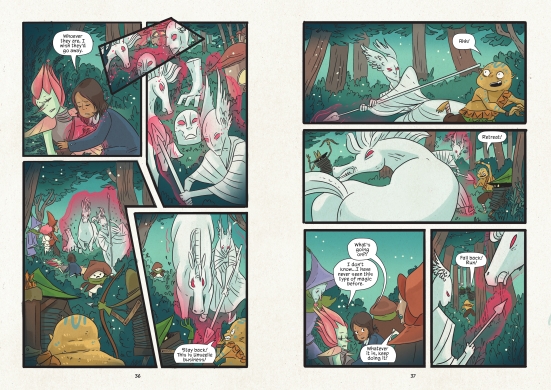 It’s early 20th-century San Francisco, and Isabel is bored. Her high-society mother expects her to be quiet, well-behaved, and flawless – clean, pressed, clothes in perfect repair. She’s shuttled off to her artist father for the summer, but he’s too wrapped up in his work to pay much attention to her, either. Taking matters into her own hands, Isabel explores the woods by her father’s home and stumbles into a fairy world: a world where two kingdoms are at war! She receives a magical necklace to keep safe, and, with the help of some new companions, sets off to end the war before it destroys the fairy world and our own world. 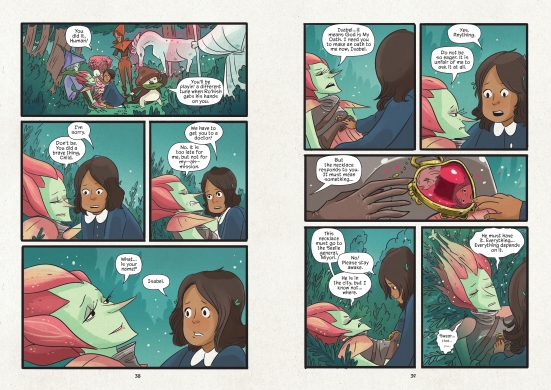 The City on the Other Side is high fantasy mixed with historical fiction, making for an exciting adventure for middle grade fantasy fans. The heroine is a girl of color, of Spanish origin; she’s smart, determined, and sick and tired of being treated like she’s an object for someone’s mantelpiece. She’s a good role model for readers who enjoy Zita, Avani from Star Scouts, and Maddy from Jewell Parker Rhodes’ Bayou Magic.

The third Crafty Cat comic book has Birdie – whose alter ego is crafty superheroine Crafty Cat – ready to take the lead role in her school play about bugs. The problem is, everyone wants the role: it’s a butterfly! Anya is back, and she wants to be the butterfly, too – and Anya always seems to get her way. Looks like a job for Crafty Cat!

I really enjoy the Crafty Cat series, and so do my library kids. Birdie is a likable character who always manages to find a way to make the best of a lousy situation; she uses crafts – and by extension, her superhero identity as Crafty Cat – to help her focus and see different possibilities. Crafty Cat is an optimistic book with an upbeat character, and it’s great fun for kids to have as a go-to on the shelves. This volume comes with five butterfly-related crafts, including a butterfly with moving wings, a hair clip, and a bookmark. 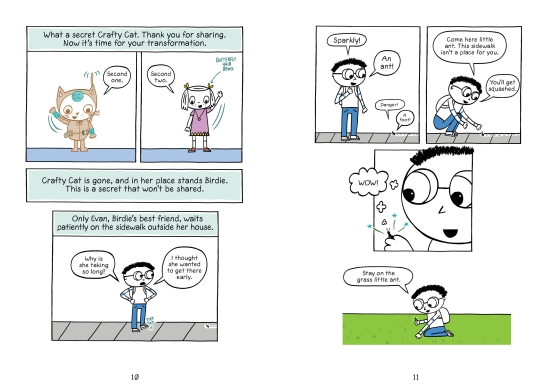 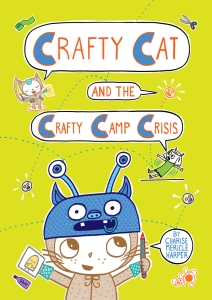 Birdie is headed to Monster Craft Camp! It’s a day of crafting at school, headed up by the custodian, but it’s a day of crafting, and Birdie – who’s alter ago is Crafty Cat – is prepared! Now, if only her best friend, Evan would show up on time… and oh, Anya, the meanest girl in school, is here today, too. Looks like this may be a job for Crafty Cat!

This latest installment of Crafty Cat tackles handling a difficult member of a group project how to make the best out of a situation when things don’t go as planned. Monster Craft Camp isn’t exactly what Birdie thought it would be, and Anya is being her rude, mean self, but just when Birdie finds herself getting frustrated and sad, Crafty Cat takes over and saves the day! It’s a fun way to communicate resiliency, optimism, and working with difficult partners.

As with the previous Crafty Cat adventure, there are crafts and at the end of the book.  A handy supply list tells readers what they need, and step-by-step directions walk little crafters through their own monster crafts. There are templates available for photocopying. 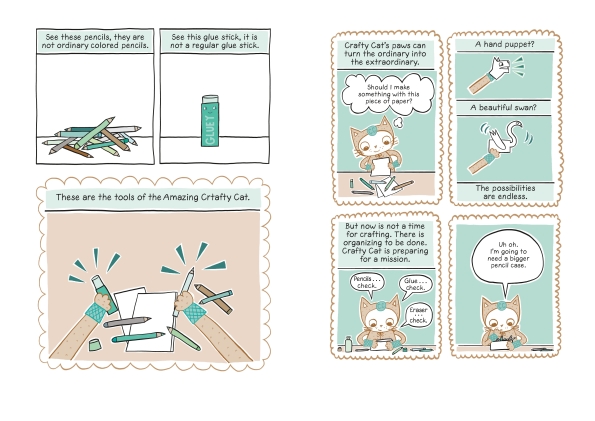 This is such a fun little series for younger readers! A definite add to the graphic novel shelf.

Bridie is a little girl who loves, loves, LOVES to craft: so much, that she has an alter ego: the Amazing Crafty Cat! Crafty Cat can craft anything, anytime! Crafty Cat becomes Bridie again so she can go to school; she’s excited because it’s her birthday and she’s got special panda cupcakes for everyone during birthday break – even Anya, the class bully. She just knows these cupcakes will make her the school star… and then, Bridie falls, sending the cupcakes flying. She gets stains on her dress trying to pick up the cupcakes. Grandpa is supposed to come to the rescue, bringing something to hand out snack time, but that’s just a disaster. Things aren’t supposed to go wrong on her birthday! What is Bridie going to do? She’s got hungry classmates! Looks like a job for… THE AMAZING CRAFTY CAT.

The first book in the Fashion Kitty/Just Grace author’s new trilogy is just too much fun. There’s a great message about teaching kids resiliency and how to fall back on Plan B… and Plan C, if necessary. Plus, there are craft ideas and template at the end of the book! You know what I’m going to say… it’s a program in a book! Make Crafty Cat your next book talk/activity; do your scanning and photocopying ahead of time, and let your kids work on the crafts as you talk about things that went wrong for them (and you), and how you all bounced back from them. Such a fun addition to graphic novel and intermediate collections, you’ll never keep them on the shelf.  Now, we just need a Crafty Cat website with some videos… 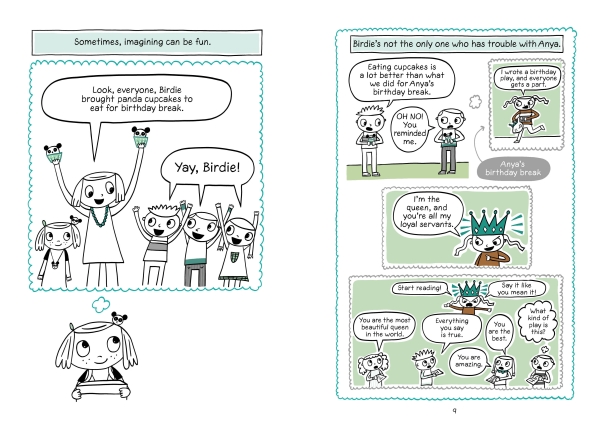 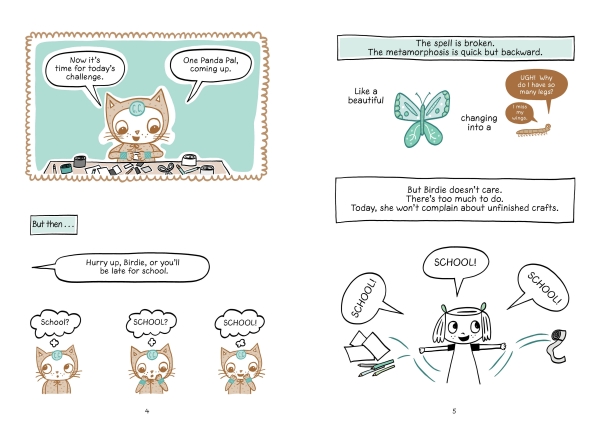 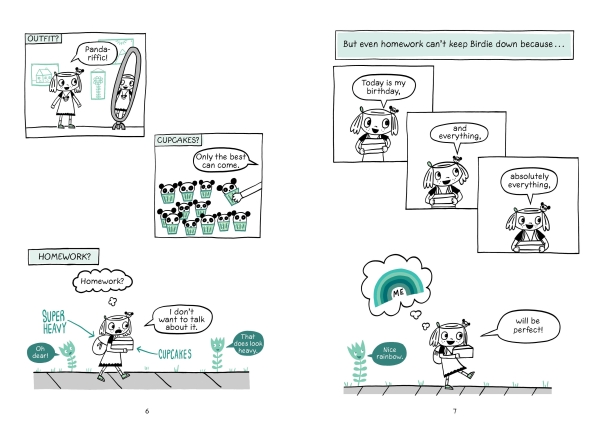 I’m a day late, but I wanted to get this Top Ten Tuesday out. Top Ten Tuesday is a Meme hosted by The Broke and the Bookish. This week, I’m spotlighting intermediate (grades 2-4) series for kids that go beyond the ones everyone knows. (Goosebumps, My Weird School, and Magic Tree House fans, don’t take offense!)

Alvin Ho series, by Lenore Look – Alvin Ho is afraid of everything – but when he’s home, he’s a superhero.

Heroes in Training series, by Joan Holub – Joan Holub’s got a companion series to Goddess Girls, focusing on a group of 10 year-old Olympians.

Just Grace series by Charise Mercile Harper – Third grader Grace has a “teeny tiny superpower” – she can tell when people are unhappy.

Sugar Plum Ballerinas series by Whoopi Goldberg – The girls of The Nutcracker School of Ballet overcome stage fright and other hardships as a group.