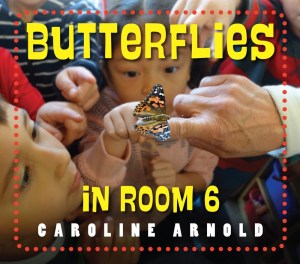 Spring is getting closer and closer, and that means that science classrooms all over the place are going to introduce their little ones to the life cycle of a caterpillar/butterfly. We’ve done it in my home, and each of my kids has done it in school, and it’s exciting every time. Butterflies in Room 6 revisits the Kindergarten students of Room 6 – a new group, since Hatching Chicks in Room 6 was published in 2017 – as they raise butterflies, starting from teeny, tiny caterpillar eggs.

Full-color photographs and informative text take this STEM/STEAM story through the step-by-step process by which the class observed and cared for their caterpillars; feeding them, observing the stages of life, moving the chrysalises to a larger, netted environment, the exciting emergence of the painted lady butterflies from their cocoons, and their release into the world! Leaf-shaped callouts throughout the book provide additional caterpillar and butterfly facts, and back matter provides butterfly questions, vocabulary, and a nice list of online and print resources for further reading.

Butterflies in Room 6 brings a real-world look into a primary classroom – it’ll get kids excited about science, especially if this is one of your classroom projects. Pair this with The Very Hungry Caterpillar and the classic that my kids all read in their kindergarten classes, Deborah Heiligman’s From Caterpillar to Butterfly. 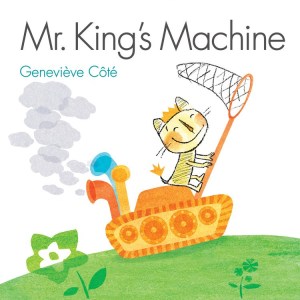 Mr. King loves flowers! He notices that a caterpillar has taken a munched on a flower, he is NOT happy, and takes it upon himself to construct a Caterpillar-Catcher. But Mr. King trades one small problem for much bigger ones: his Caterpillar-Catcher is making a mess of the environment! It’s trampling flowers and grass, it’s belching awful gray smoke into the air, and most importantly, it’s stopping the caterpillar from doing his work: becoming a butterfly that will help flowers grow as they fly from plant to plan! Mr. King’s friends confront him, and he listens; then, he decides on a new invention, and takes apart his Caterpillar-Catcher to create a much more environmentally friendly machine: the Flower-Fan!

This is the third book in the Mr. King series; the first one I’ve read. You don’t need to pick up any of the other books to know what’s going on, just dive into this fun Earth Day-friendly tale for our youngest learners! Mr. King is a sweet, well-meaning lion (but he’s got no mane – maybe he’s still young?) who has a knee-jerk reaction and tries to take action. Toddlers and preschoolers will understand this, and they’ll understand how Mr. King’s friends see what he’s doing wrong. Use this as an interactive read-aloud and ask your readers what Mr. King’s doing wrong, too – it’s a great learning opportunity, especially if you’re talking about Earth Day, conservation, and pollution.

The mixed media artwork is adorable, with Mr. King standing out as a crayon-drawn character, set into what looks like collage backgrounds. It’s a great read-aloud book that toddlers and preschoolers can enjoy, and allows for a lot of interactivity: talk about what we can do as a community to make our neighborhoods nicer; how we can make our world a better place as a global community (a better discussion for school-age readers).

Mr. King’s Machine has received a starred review from Kirkus.

Geneviève Côté is a Montreal artist whose illustrations have graced the pages of publications such as the New York Times and the Boston Globe. Her books have received three nominations for the Governor General’s Award for Illustration, one of which went on to win, and she has also won the the Elisabeth Mrazik-Cleaver Award.