Diane Nash is a civil rights leader who was a Freedom Rider; a lunch counter protestor, and a 2022 Presidential Medal of Freedom recipient. Sandra Neil Wallace and four-time Caldecott Honor recipient Bryan Collier bring her story to vibrant life in Love is Loud.

Born in 1938 in Chicago’s South Side, Diane Nash was a child of the diaspora; her parents refusing to raise a family in the segregated South. Enveloped in love and surrounded by diversity, she experienced Jim Crow laws once she moved to Tennessee to attend college. Angry and humiliated, she refused friends’ attempts to tell her “it’s always been this way” and “go along to get along”, and took action, enduring abuse at Nashville’s lunch counters and joining the Freedom Riders to protest segregated bus terminals. Wallace writes a tribute to Nash’s accomplishments, with key words and phrases bolded and capitalized to invoke strength and power in readers: “ELATION, INVIGORATION”; “NO HIDING. NO FIGHTING BACK”; “LEADING, PROCEEDING”. Bryan Collier’s watercolor and collage illustrations bring texture and realism to spreads, creating both warm and dramatic moments in Nash’s life. Back matter includes notes from the author and illustrator, a timeline of Nash’s life, and resources for further reading.

Love is Loud has starred reviews from Kirkus, Publishers Weekly, and The Horn Book.

Sandra Neil Wallace writes about people who break barriers and change the world. She is the author of several award-winning books for children, including Between the Lines: How Ernie Barnes Went from the Football Field to the Art Gallery, illustrated by Bryan Collier, which received the Orbis Pictus Book Award and was an ALA Notable Book. A former ESPN reporter and the first woman to host an NHL broadcast, she is the recipient of the Outstanding Women of New Hampshire Award and creates change as cofounder of The Daily Good, a nonprofit bringing twenty thousand free, culturally diverse foods to college students each year through its Global Foods Pantries. Visit Sandra at SandraNeilWallace.com.
Bryan Collier is a beloved illustrator known for his unique style combining watercolor and detailed collage. He is a four-time Caldecott Honor recipient for Trombone Shorty, Dave the Potter, Martin’s Big Words, and Rosa. His books have won many other awards as well, including six Coretta Scott King Illustrator Awards. His recent books include By and By,Thurgood, The Five O’Clock Band, and Between the Lines. He lives in New York with his family.
*”A poignant and powerful portrayal of the life and work of an unsung civil rights activist….Wallace’s text lends buoyancy to the narrative, making it a memorable read-aloud.”

*“During the 1960s, Diane Nash was one of the most influential and effective leaders of the Civil Rights Movement, yet most people don’t know who she is.” Wallace’s latest picture-book collaboration with Collier seeks to correct that ….the book opens with images of Nash’s parents cradling her as a baby and then of Nash, as a small child, being hugged by her grandmother, highlighting the love that encouraged her activism.
— The Horn Book — STARRED REVIEW

This Time for Kids collection highlights the life stories of four great African-Americans: Harriet Tubman, who led slaves to freedom; Jackie Robinson, the groundbreaking athlete and first African-American baseball player to play for the major leagues; Rosa Parks, the civil rights pioneer who refused to give up her seat on the bus; and Barack Obama, the first African-American President of the United States. 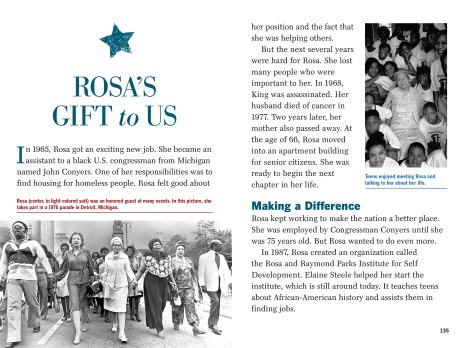 With photos and artwork, fast facts and timelines throughout the book, this is a great book to have on hand in homes, classrooms and libraries for help with homework and reports and is essential reading for everyone. Civil Rights activist and NPR correspondent Charlayne Hunter-Gault’s introduction discusses how Black history provided her with the “invisible armor”  she needed to meet life’s challenges.

As part of the Heroes of Black History Book Tour, I’m spotlighting Barack Obama’s biography. The 40-page spotlight on our 44th President’s life is loaded with photos and a timeline, and covers his life from his birth in Hawaii to his 2017 farewell speech as he left office. The profile covers his relationship with his mother and grandmother; his mother’s remarriage and their subsequent move to Jakarta, Indonesia, and his return to Hawaii to live with his parents at the age of 10. We read about his marriage to Michelle Obama and births of his daughters, Malia and Sasha, and the story of his political rise from Senator to the White House. I was happy to read about the 2004 Democratic National Convention; the convention where Obama’s moving speech made Americans sit up and take notice – I still remember a coworker at the time coming to work the next day and telling me, “That man is going to be our next President.”

An appendix includes 19 additional Heroes profiles, from W.E.B. DuBois to John Lewis, a glossary and full index to round out this great reference. You can find a free curriculum guide and downloadable Fast Facts sheets on each icon.

Born in New York City in 1935, Raven Wilkinson was a little girl who fell in love with ballet and grew up to become the first African American ballerina to tour with a major American touring troupe. She faced racism at every turn; she auditioned three times for the Ballet Russe de Monte Carlo before they finally accepted her into the touring company. When they toured the American South in the 1950s, she faced adversity from hotels who wouldn’t allow her to stay, fearing repercussions from the Ku Klux Klan; ignorance in the form of racists running onto the stage to protest the “nigra in the company”; and dining in hotels where families left their Klan sheets in a pile in the back while they ate dinner together. She persisted, even when she was passed over time and again for the starring role in Swan Lake, finally achieving the spot in 1967 with the Dutch National Ballet of Holland. She later joined the New York City Opera, dancing until she was 50. She’s inspired countless dancers, including Misty Copeland, who became the first African American principal dancer with the American Ballet Theater in 2015 AND danced in Swan Lake. Copeland has said of Raven Wilkinson, “She was a mentor in my life before I met her.”

This is a lovely look at Raven Wilkinson’s life and career, especially relevant in our racially charged society – the more things change, the more things stay the same, it would sadly seem. When Raven eats dinner in a hotel surrounded by families who leave their Klan sheets strewn across seats while they eat, it’s horrifying because it normalizes hate. The indignity of Raven Wilkinson having to endure this indignity is like a gut punch to an older reader, and we need to use that nausea, that anger, that outright disgust, as a teaching opportunity to de-normalize this for younger readers. The illustrations are soft, almost comic book-like, while retaining a realistic quality, that will appeal to younger readers. 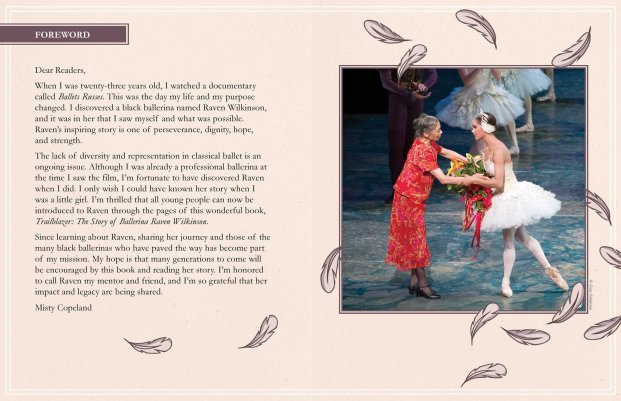 This is a beautifully illustrated picture book biography of an African American pioneer few people may be familiar with. Let’s change that. If you ask kids to name African American role models, you’ll likely hear the big names, but let’s make MORE big names. Let’s put books like Trailblazer in our displays, showing kids that there are pioneers everywhere. Neil Degrasse Tyson, Mae Jemison, and Katherine Johnson? Heck yes, get them in front of kids. STEM and the sciences are important. And let’s show them Trailblazer and Firebird; Radiant Child and When Marian Sang, DJ Kool Herc and the Creation of Hip Hop and Muddy to remind readers everywhere that there are pioneers in the arts, too. Children need to see inspiration everywhere, and that there are advocates in every walk of life. 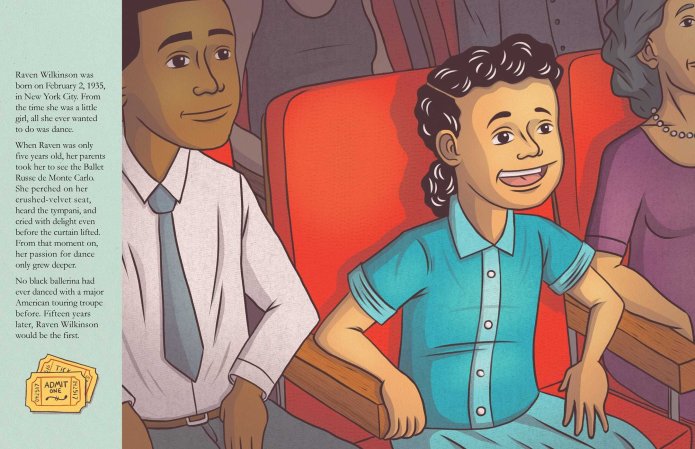 This 2015 video features Raven Wilkinson and Misty Copeland when Dance/USA, the national association for professional dance, recognized Raven Wilkinson, the 2015 Dance/USA Trustees Awardee, at the Dance/USA Annual Conference in Miami on June 17, 2015.

Leda Schubert’s most recent picture book biography, Listen, was about singer and activist Pete Seeger. Her website offers more information about her books, including downloadable activity guides and discussion questions. Illustrator Theodore Taylor III is a Coretta Scott King John Steptoe New Talent Award Winner. See more of his artwork and learn about his other books at his website.

In May 1963, children in Birmingham, Alabama, trained in peaceful, civil disobedience, marched to protest segregation. Nine year-old Audrey Faye Hendricks was the youngest marcher, fully invested in civil rights and aware that she would likely go to jail. She spent a week in juvenile hall with flimsy blankets and no toothbrush, but she persevered and made history. Nonfiction author Cynthia Levinson tells the story of the youngest marcher, with illustrations by Vanessa Brantley Newton, here for younger audiences, assuring children that no one is too small, too young, to make a difference in the world.

I’ve been handing this book to kids coming in, looking for African-American biographies for their Black History Month reports for just this reason. I want children to see that they are important. They count. At a time when many feel marginalized, books like The Youngest Marcher, with its powerful words and images, offer representation and affirmation. Children have a voice, and with support and encouragement, they can use them and be heard.

Cynthia Levinson’s author website offers links to further resources, including curriculum guides and videos. Illustrator Vanessa Brantley-Newton was spotlighted by the WeNeedDiverseBooks initiative, for which she also created original artwork. For more information about the 1963 Birmingham Children’s Crusade, visit Biography.com or the Zinn Education Project, offering information about the award-winning documentary, Mighty Times.