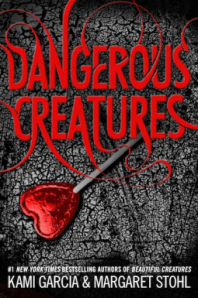 Dangerous Creatures follows Ridley and Link, who is – if you’ve been keeping up with the series, you know this – a quarter incubus now. So I really need to catch up. The gang we (I) know, including Lena and Ethan, are all together right after graduation and the events of the last book in the series,  Beautiful Redemption. They’re going their separate ways, but vow to stay together and not drift apart, as so many groups of friends do.

From there, Ridley and Link head up to New York, where Link intends to find success in a band. What he doesn’t know is that Ridley is in trouble – when isn’t she, really? – and Link’s future is part of her settling her debts.  Link, while ignorant of Ridley’s troubles, knows that something’s up between he and Ridley, more than the usual at-each-other’s-throats business. Ridley knows she’s no good for Link, but they just can’t seem to stay apart – or will something drive them apart for good this time?

Beautiful Creatures introduced a lot of characters and set several storylines into motion. The story of Ridley and Link has been developing since the very first book, so by now, readers know who they are. They’re a hugely popular couple and have nicely fleshed-out backgrounds and storylines. Having only read the first book in this series, I was able to follow the story easily enough, with exposition drawing in any details I missed in the meantime. Newcomers to the series will be able to jump in, and established fans will be very happy.

The book is a page-turner. There are some new characters and there’s magic; new troubles for Ridley to get herself (and Link) into, and repercussions from previous events. What I loved so much about the first book – the weaving of the Caster storyline with the history of the old South – is missing here, but the authors introduce readers to New York nightlife, which is exciting in terms of a new locale. I missed the history of it all, to be honest, and the constant “he/she loves me, he/she loves me not” interplay between Ridley and Link became a little tedious for me, but I’m sure it will continue to be hugely popular with teen readers.

I enjoyed the book. It’s got an established audience who will snap this book up. It’s going on the shelves at my library, and I know it will fly off those shelves. Now, to fill in the gaps in my Caster knowledge… 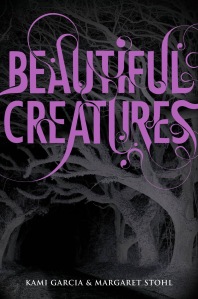 I’ll admit it – I’m not a Twilight fan. It’s not my book. And Beautiful Creatures felt, to me, like a Twilight type of book, so I didn’t pick it up. I was recently approved to read the latest, upcoming book in the Beautiful Creatures, though, (Dangerous Creatures – the review’s coming!) so I figured I should at least read the first book, so I could have some idea of what’s going on.

I was wrong, folks. Beautiful Creatures was great. This was my book, just waiting for me to pick it up.

The story involves Lena Duchannes and Ethan Wate, two teenagers in Gatlin, South Carolina. Ethan is a high school basketball player who can’t wait to get out of Gatlin. He’s in with the in crowd, but really doesn’t care anymore. He just want out of the everyday sameness of life in a small, Southern town. Lena is the new girl in school, and she just doesn’t fit in with the Southern beauty queen/mean girls who run the school. When Ethan realizes that Lena looks exactly like the mystery girl he’s been dreaming about, he’s got to find out who she is.

The story weaves a YA romance in with a complex, fascinating tale of witchcraft and Southern history that kept me turning pages, demanding to know what was going to happen next. I love the idea of factions within the “Caster” – they’re not witches and wizards, and this isn’t Harry Potter – community. There are different types of magic, and everyone is born to something different. When Casters reach the age of 16, they are “claimed” by either the light side of magic or the dark side – and wrapped up in this claiming is a mystery that runs through the book as an engrossing subplot.

There’s something here for everyone. There’s paranormal romance, history, mystery, and drama. We meet characters that will take on greater roles in subsequent books. All in all, Beautiful Creatures sold me – and I’m glad I picked it up. I’ve heard the movie is subpar compared to the book, so I’ll keep that in mind and just enjoy the books.