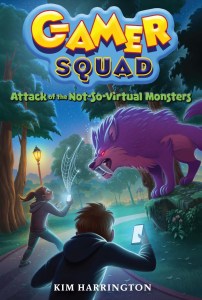 Bex is a gamer, and her game of choice is Monsters Unleashed: an augmented reality game where you hunt and capture monsters using your smartphone and the game app. (Pokemon Go players, you got this.) She and her best friend, Charlie, love playing the game until a mishap with a strange machine at Charlie’s grandfather’s place causes a WiFi gitch and empties Bex’s monster catalog… into the real world! Now, it’s up to Bex, Charlie, and a frenemy Willa to track them all down and get them back before the monsters overrun their town.

Gamer Squad is one of those series you just know the kids are going to swarm when you get them on the shelves. It brings handheld gaming to middle grade fiction with fun and adventure, and author Kim Harrington manages to give us a strong female protagonist, a story about friendship, and addresses bullying all at once. It’s a fast-moving story with likable characters, excitement, and leaves you ready for the sequel, which in this case, released on the same day. 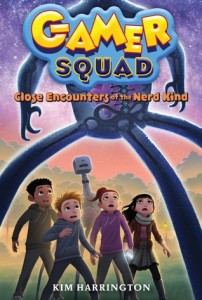 A no-brainer for your gamer kids and a nice fiction-y wink to add to your STEM program displays. I’ve just ordered both for my library; the third book hits shelves this Fall.