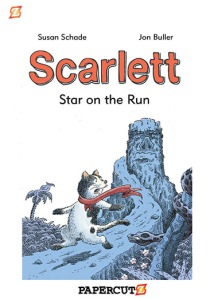 Scarlett is a movie star with a touch of the diva about her – she’s also a talking cat, living with other animal actors at Pafco Labs. They live in cages, get energy shots, and have their lives pretty much controlled by Sloan Pafco, the scientist/head of the studio, and Scarlett is just sick of it. She spots an empty window in the rec room and grabs her chance at freedom – which lands her in the freezing snow; luckily, a wacky but kind-hearted guy named Frank takes her in; Trotter, her canine best friend, also ran away from the lab and joins her at Frank’s. While living with Frank, the two learns all about being human: ordering food, playing the lottery, and watching TV. He thinks he’s hearing voices, so their cover is safe for now. When Frank falls ill, Scarlett poses as his housekeeper and calls the ambulance; while Frank’s away, Scarlett and Trotter set about making some improvements to the house and their lives. But can their secret stay safe forever?

This was a cute animal buddy story. Using a combination of graphic novel and chapter book, narrated by Scarlett, to tell the story, is a great way to bring in readers who don’t have the patience to stick with an entire chapter book just yet. Scarlett on the Run is an overall light book, but touches on issues like animal testing and experimentation and hoarding, and offers the opportunity for a good conversation with kids interested in learning more.

Author and illustrator husband and wife duo Jon Buller and Susan Schade have a webpage where you can see more of their work, learn about the rest of their books (including one of my son’s favorite graphic novels series, The Fog Mound), and find a cute lesson on cartooning.