Eighth grader Jay gets a prescription for Accutane to deal with his acne, but that medication comes with serious side effects. A-Okay, a semi-autobiographical graphic novel from Jarad Greene, covers some of the scary moments most middle schoolers feel at some point: body issues, identity, and finding your people. Jay suffers bullying because of his acne, and he’s disappointed because none of his friends are in his classes or share his lunch period, and his best friend seems to be avoiding him. Meanwhile, Mark and Amy, two of his classmates, are each showing more than friendly feelings for him, and he doesn’t feel the same. Written with sensitive humor and insight, A-Okay is about the middle school experience as a whole, and about asexuality: a diminished or lack of sexual attraction.

The middle school years are fraught with a hormonal mix of emotion and reaction that would frighten anyone: our bodies seemingly go haywire, leaving us feeling confused and betrayed; friendships are fraught with drama and complexity; fears about the future threaten to crush us. Greene understands his audience and quietly gives middle schoolers a voice with his A-Okay characters, who let middle schoolers know that every one of these feelings and emotions are okay. Colorful and upbeat illustrations put readers at ease, and he writes with a gift for both dialogue and introspection. A story whose time has come, Bleeding Cool’s Rich Johnson nailed it when he wrote that A-Okay will be “to kids with acne what Smile was to kids with braces”. And then some.

For Ace resources, read the BBC’s article, “The Rise of the Invisible Orientation”; Stonewall.org’s “Six Ways to Be an Ally to Asexual People”; and visit the Asexual Visibility and Education Network’s website and follow them on Twitter. A-Okay is featured in HarperAlley’s Classroom Conversations brochure, offering booktalks and discussion questions. 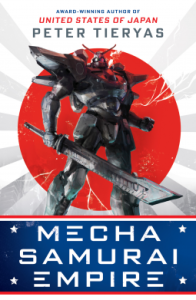 This is a fantastic crossover novel for any sci-fi/fantasy fans, manga and anime fans, and alternate history fans out there.  I did NOT want to put this one down!

The backstory: The AXIS powers (primarily Germany and Japan, for purposes of this novel) won what we know as World War II. America is now known as the United States of Japan, and Germany shares control to some degree, of the American territories. It’s an uneasy alliance between Japan and Germany, and the terrorists known as the George Washingtons are always ready to fight.

Now: Makoto Fujimoto is a young man born and raised in California, orphaned by war and raised by an abusive foster home, now a student with one goal: to attend the Berkeley Military Academy and become a mecha pilot. His awful grades threaten his dream, but a chance to work as a civilian mech pilot gives him a chance to get into shape and learn some skills. When his squadron comes under attack by Nazi bio-mechs, he and his surviving squadmate land two spots at the Military Academy, just in time for tensions between the USJ and Nazi Germany to hit an all-time high. There are traitors everywhere… maybe even among Makoto’s old friends.

I LOVED this book. I haven’t read the first book, United States of Japan, and you don’t need to – this adventure takes place in the same universe, but Makoto’s story is entirely his own. (You can bet that I’ve just requested it for myself, and put both books in order cart for the library, though.) There’s fantastic action and world-building; gratuitous mech battles; intrigue, and strong characters. Peter Tieryas creates some wonderfully strong, intelligent female characters and gives his male characters empathy and feeling. Pacific Rim fans, Harry Turtledove fans, and Man in the High Castle fans will dive right into this series, and so will your anime and manga fans. I’ve already booktalked this one to a teen at my library; he fully expects this to be waiting here for him when it hits shelves on September 18th.

Get your geek on and booktalk/display with Garrison Girl and some gundam manga.