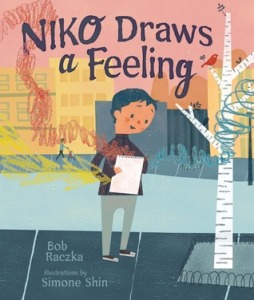 Niko loves to draw the world around him. Everything inspires him, and ideas flow through him, from his brain down to his fingers. He captures feelings, not images: the ring-a-ling of an ice cream truck; the warmth of the sun; the hard work of a mother robin building a next. No one seems to understand Niko. They’re looking for the bell of the truck; the sun and Niko’s face; the mother robin. Niko captures the feelings these things inspire, but no one seems to grasp that, until he meets Iris, a new girl moving into the neighborhood. She understands exactly what he has to say, because she feels, rather than looks.

I adore this book. It reaches in and touches the reader, just like Niko’s drawings. Younger children will appreciate that someone out there understands what they’re trying to communicate, much like Niko and Iris finding one another. Raczka and Shin create a story that relies on feelings and emotions inspired by the world around us, and reminding us that art, like feeling, is abstract, and able to be communicated in many ways. Simone Shin’s mixed media, digital and acrylic paints give us a world that looks like it could have been drawn by Niko himself.

There are so many ways to use this book beyond a simple storytime. Ask kids to draw their own feelings, their own experiences of the world around them. Let them explain what they see, and see it with them. Pair this with Andrew Larsen and Mike Lowery’s A Squiggly Story for a great storytime on self-expression and art.